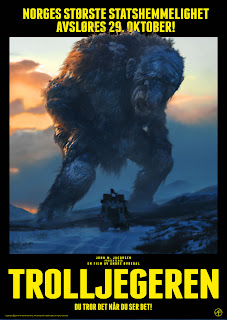 The Troll Hunter is a movie that is not really for everyone. The best way to describe this movie would be a European variation of Cloverfield. This is a found footage movie and it never really breaks from that concept. The cameraman in this movie plays a huge part in the movie and controls how well the movie flows. There is an abundance of shots of the environments in the movie that could have been cut from the movie to reduce the running time. The actors do a good enough job with the material they were given but there are no true standout performances. The trolls in the movie are pretty impressive and they are the real stars of the film. Each troll in the movie is very different and has their own "personality" and each has a different environment they are in. All of the troll encounters play out like a boss battle in a video game, each with their own strengths, weaknesses, and challenges they present to the group in the movie. This is a hard movie to recommend to everyone, the fact that is in Norwegian and is very slow paced may throw some people off. Having to read subtitles while trying to focus on the action on screen is also something that will turn people away from this movie. I thought that this was an okay movie that suffered from a lack of budget and a simplistic screenplay. There is a US remake in the works and I'm not sure how effective that will truly be overall. This as a big budget movie in my opinion will not really work, it just needs to have a more effective screenplay with better actors.
Posted by Unknown at 9:47 PM