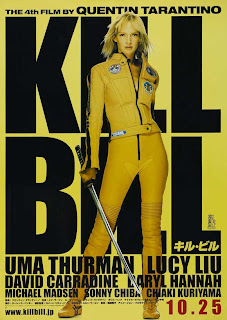 Tarantino is one of the only true geniuses in Hollywood anymore. Everything he touches is pure gold, his worst movie is still better than most directors' masterpieces. Kill Bill Vol.1 happens to be one of his best, so that pretty much makes it a classic. He always casts the right people for the characters he has written and has the uncanny ability to write amazing dialogue in all of his movies. Everything is pitch perfect in the movies itself and this is because of the determination of both the director and his cast. When you have a group of people working as hard as they can to make a great movie, it usually pays off in the end.

The movie tells the story of The Bride, who is a highly trained assassin trying to escape the life and become a mother and wife. The rest of her team and her boss are not thrilled about this fact so they attempt to kill her and then slaughter her entire wedding party. This is where the tale of revenge begins and The Bride will not stop until all of the people involved in her attempted murder are dead and in the ground. This movie focuses on her hunting down two of the members of her team, and each fight plays out almost like a boss battle in a video game and each of the assassins she is hunting symbolize what her life could have potentially been. I'll get into that later in the review. The action is pretty constant in the movie and it features some of the best fight sequences in movie history. This movie is worth watching for the Crazy 88s battle sequence alone.

Tarantino has crafted some of the most widely known movies of all time and this is tied with Inglourious Basterds for his best movies in my personal opinion. He just has a way of crafting a story that just draws you in because he take such care with every aspect of the movie he is making. The dialogue is always top notch, casting is on the same level, and while some of his stories have a basic premise he has the ability to mold the stories into something truly special. The only other directors that can challenge him in my opinion are Christopher Nolan and David Fincher. They are all part of the elite in the movie industry but they can't really be directly compared to each other because the movies they make are so different from each others. Tarantino has the ability to combine several genres into a single movie and in turn create a new sub-genre or in some cases a new genre all together. Kill Bill Vol.1 has elements of classic samurai movies, revenge thrillers, exploitation, Kung-fu, and girls with guns movies. He has a way of taking the best aspects of all of these types of movies and fitting them together like pieces of a puzzle to make one beautiful coherent picture.

Uma Thurman really is the glue that holds this movie together. Without her, Tarantino may have had a flop or been unable to even produce this movie at all. She is physically commanding on screen and she really does seem like she would be a legitimate threat as an assassin. She does an amazing job of portraying this woman who is hell bent on revenge and who coldly calculates every movie she must make. Thurman show a great emotional range in this movie going from being scared in the opening scene, having a breakdown later, and then showing unflinching determination in the main bulk of the scenes in the movie. Her physical ability also comes into play in her fight scenes which are also incredible and she handles everything with great fluidity and the scenes play out like you would envision with a skilled assassin and nothing feels forced or fake.

See this movie and then watch Kill Bill Vol. 2 and for the best viewing experience watch them back to back so you get the full story in one shot. Tarantino is a rare film director who actually follows through on everything that he promises. While many consider Pulp Fiction to be his best movie, this is his true masterpiece to date. I am sure he will make many more movies and some may be better than this, but as of this moment this is his best movie in my eyes. Just watch it, it is a perfect combo of some of the best movie genres and every performance is great. If you like movies that don't suck then watch this.

P.S- If you don't like this movie, you are dumb and God can't fix you.