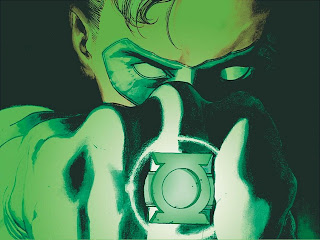 This is the first real attempt at adapting a DC Comics character to the big screen other than Superman and Batman. A lot of people who I know that are fans of the Green Lantern comic were disappointed with this movie, and I being a huge fan of the comic am torn over the movie. On one hand I feel like it was the best they could have possibly done with the material because it needed to be adapted for everyone and not just fans of the comics. On the other side I was disappointed with how some of the characters were portrayed on screen and some of the story elements were weaker than they should have been. Some of the casting was spot on such as Ryan Reynolds as Hal Jordan and Blake Lively as Carol Ferris. Mark Strong as Sinestro was probably the best casting of all because he embodies that character just like he does in all of his acting roles. Peter Sarsgaard was a terrible choice to be in the movie because he has almost no screen presence and his portrayal of Hector Hammond was embarrassing. The same goes for Tim Robbins and Angela Bassett who each butcher their characters and should have been left out of the movie.

The movie focuses on the origins of Hal Jordan as the Green Lantern, and showing us how his pat experiences will shape him into becoming a great hero. The movie also shows the origins of Carol Ferris, who will one day become Star Sapphire, and Hector Hammond , who in the comics is one of Hal Jordan's greatest enemies. There is a great amount of time spent on Hal's struggle to overcome the fear that he has been carrying most of his life and when he is able to do this that will allow him to be a great Green Lantern. There is also an emphasis placed on the fact that the Green Lanterns are a police force for the whole universe and that each Lantern not only has a responsibility to protect their home world but to also protect and serve the planets in their sector. The entity known as Parallax is the main villain in the movie and is vastly different then the comic version in that the comic version is literally the true entity of fear and in the movie it is a Green Lantern guardian that was corrupted by the power of fear.

The director of the movie is Martin Campbell who has been at the helm of some over the top action movies in the last 15 years. Some of these movies include Goldeneye, Vertical Limit, Casino Royale, and now Green Lantern. He does a serviceable job with the script he was given and did a decent job with the casting of the characters. The creativity in the special effects department was where the movie really shines and is one of the most visually stunning movies that I have seen in a long time. Even the suits that the Lanterns wear are amazingly detailed, they really do seem to be made of pure energy that has been fitted over the ring bearer. The constructs created by the rings in the movie are also pretty impressive but not as varied as I would have hoped they would have been.

Ryan Reynolds seems to be the best person to play the character of Hal Jordan. He simply has the ability to be cocky, witty, sarcastic, and fearless all at the same time which are huge parts of the character of Hal Jordan. His portrayal of Hal Jordan is about as true you can get to the comic book version, and the same could be said for Mark Strong's Sinestro. I really wished that Sinestro had a larger part in the movie because he is such an interesting and important character in the comic books and you really don't get that sense from the movie. The writers did address Sinestro's willingness to do anything to make the Green Lantern's stronger by him suggesting that they try and harness fear in order to fight fear. This is a nod to the Sinestro Corps storyline that ran in the comics a few years ago. All of the other characters in the movie in my personal opinion felt kind of superfluous excluding Carol Ferris because she is essential to Hal Jordan's development as a character.

Overall this a pretty solid adaptation of a comic that really could only should have been adapted in animated form. The main attractions of this movie are Ryan Reynolds and Mark Strong who each excel in their roles as the most prominent Green Lanterns from the comic series. Do not come into this movie expecting to see something of the same quality as The Dark Knight. This is more in the quality range of Captain America because it takes huge liberties with the source material but keeps the main characters fairly intact. I enjoyed it and you may as well give it a shot.
Posted by Unknown at 12:45 PM