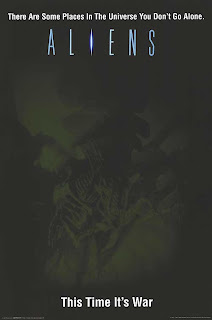 This is one of the greatest sci-fi movies of all time and in my mind there is no argument that could dispute that. This along with Predator and Terminator 2 are probably still the three shining examples of Sci-Fi/Action being a legitimate gene. It is also no coincidence that 2 of the 3 are made by James Cameron who used to be one of the greatest Sci-Fi directors in the industry. His creation of Avatar takes him down a notch in my personal opinion. I have seen the Special Edition of this movie and the regular Theatrical Version as well and the special edition is a much superior film due to the inclusion of a greater amount of back story on Ripley and the other characters in the movie. I was pleased with every aspect of this movie, the characters are awesome, atmosphere is top notch, and the story is just as great as everything in the movie. This is also where the Alien franchise ends in my eyes because the other sequels are atrocities.

The movie deals with the direct aftermath of the first film in terms of the character of Ellen Ripleywho has been in suspended animation for over fifty years after her initial battle with a single "Alien". She wakes to a world that is vastly different than the one she remembers and has to adjust to that in the beginning. There is also a fair amount of doubt cast on her actions of the first film because there is no evidence that the "Alien" ever existed. Not helping matters is that there is a colony on the planet that her crew found the ship housing the "Alien", and the colony has been there for nearly 20 years without a sighting of the creatures. When there is a communications disruption between the colony and the Company, Ripley is recruited along with a group of marines to investigate. That is the set up of the story and I will refrain from going further because if you have not seen this movie then you owe it to yourself to just experience this movie.

James Cameron has to be given the credit that he deserves in terms of legitimizing the Sci-Fi genre in the eyes of many people including the Academy Awards voters. He created two of the greatest science fiction movies of all time and no one can take that away from him. I can resent him for creating the abomination that is Avatar though. I really hate that movie and have had to see it hundreds of times due to the fact it was streamed onto most of the televisions at my last job for the better part of a year and a half.

The cast in this movie is sort of a collection of the best supporting actors in Hollywood and one legitimate star. Sigourney Weaver gives the best performance of her career and carries this movie at times. She is the prototypical strong female character and a lot of characters are written to be like her but she has never really been bested in any movie. She goes from being scared of the creatures in the beginning to going after them full force with everything she has. The other starring roles in the movie are Corporal Hicks played by Michael Biehn, who has makor roles in both the Alien franchise and The Terminator franchise. He plays a grunt marine who evolves from being an order taker to a true hero and commander all within the same movie. The android Bishop is also a personal favorite of mine, his character is amazing and has a deep seeded history within the Alien mythology. Every character plays an important role in this movie and that is what really makes this movie work because every character in the movie is engaging.

P.S- This movie has the greatest sound effect in the history of movies, and that sound is that of the Pulse Rifle.
Posted by Unknown at 8:35 PM