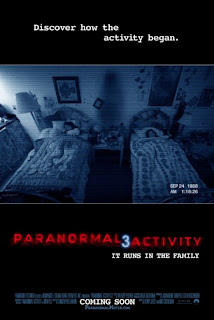 When reading this review keep in mind that all of the opinions that are given are mine and mine alone. Paranormal Activity 3 is the latest addition to the budding franchise that seems to enthrall audiences every Halloween season. No name actors, same setups used as always, and "a better script" are the basic elements of this movie. As you can tell, I'm not the biggest fan of this series at all. A lot of gags in the tree movies are sloppy and the story is even sloppier when you fact the third movie into the continuity. The 4th one that is due to release next year has a lot of improving to do before it can be considered a great horror movie.

Paranormal Activity follows the main characters from the first two movies when they were younger living in California with their recently married parents. Over the course of the film the viewer gets an inside look at what is going on with the demon that is stalking the girls and the Dad sets up cameras around the house to make the viewing more convenient. As the movie progresses the supernatural happenings begin to increase in frequency and strength. This one had the best sequences to date but the others seemed to have a better flow to them. The standout sequence in this movie has to be with Randy and Katie playing Bloody Mary in the bathroom. Randy, being the only rational character has some reservations about going into the bedroom that is being torn apart by the demon but has to do it to protect Katie. It is actually a really effective sequence that scared a ton of people in the theater. The other sequence that got gasps was the disappearing kitchen which if you watch you will understand what I am talking about.

This is a movie full of character who do not follow logic in any way at all. Generally if your daughter gets help up in the air by her ponytail by an invisible creature on video then you might want to try and get help from someone. The only people who act rationally are Randy and the babysitter. Randy is the girls' dad's friend, and when him and Katie play Bloody Mary and have a less then favorable encounter with the demon, he splits as soon as Katie's parents get home. He did his job and protected her but then he made the right decision and got as far away as he could from the damned family. The babysitter has an up close and personal meeting with the demon and peaces almost automatically. These are good decisions, not like bringing your whole family to the creepy grandmother's who keeps insisting that you have kids until you have a boy, so she can secretly murder your entire family and put the demon in the child's body.

Another problem I had with this movie is that the end is telegraphed about halfway through the movie. The grandmother keeps making it a point to try and convince Julia to have a boy over and over. Even at the beginning she tries to talk Julia out of staying with Dennis, our main character. As soon as they went to the grandmother's towards the end of the movie, the writing was on the wall and the end was all but certain. Dennis is not a stupid character, he is just inquisitive and wants to find out as much about the situation as he could so he could then act. He tries to warn his wife but she doesn't want to listen and it bites them both in the ass. Also the continuity of this movie does not fit with that of the first movie. The fact that Katie never mention her parents dying in the first movie and then they were brutally murdered in 1988 but this may be due to the "brainwashing" that goes on off screen at the end of the movie. I also don't see how the 4th movie can follow the same setup as the other 3 movies. The camera thing is believable only for so long but having another movie of that may be pushing it a little. The security footage works but not someone actually filming these ridiculous occurrences

This was a pretty mediocre movie that got a lot out of the crowd when I went to go see it. I always heard someone gasping or screaming in the theater. This for a horror movie is essential because you want to get you audience involved in the movie when they are in the theater.If you have seen the other two then you have to see this one just to complete the trilogy. This movie didn't really work for me but if you like scary movies then you might as well take a shot on this movie.
Posted by Unknown at 10:53 PM