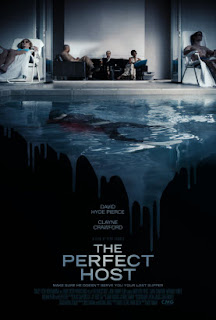 This was easily one of the best thrillers I have seen in some time. This is a fresh take on the psychotic/serial killer movie genre and it knocked it out of the park. David Hyde Pierce give a truly captivating performance in this movie and I would really like to see him in more movies because he is such a talented actor and is underutilized in Hollywood. Clayne Crawford also kills it in this movie as the bank robber turned hostage, and he is just as commanding on the screen as Pierce on screen but just in a different way. The duo makes this movie very engaging , and there is never a boring moment on screen which is great since the movie on runs a mere 92 minutes. Most thrillers take a very conventional route and this is anything other than conventional, with many genre staples being turned on their heads.

The movie begins following our main character right after he has robbed a bank, the audience does not see the act but we get sense that it didn't go as smoothly as he would have wanted. He then tries to find a place to hide in order to escape police until he can come up with a real escape plan. He meets Pierce's character when he goes up to his in order to try to find a place to hide. He talks his way into Pierce's house and acts as a friend of a friend in order to gain entry. Then as the movie progresses we find out that Pierce is a schizophrenic who has the wildly imaginative delusions of dinner parties with guests and everything that comes along with it. The viewer has just as much knowledge about the situation as the main character does and that really helps the plot move forward because you really want to know what is going to happen as the story progresses. Then the discovery that Pierce is a serial killer really ramps up the tension of the story because you don't know how how his character will react in any given situation due to the fact that he is insane. There are a lot of third act twists that I will not go into because it will ruin most of the movie. Let me just say that the twists in the movie are great and they really don't interfere with the flow of the story.

This is another great addition to the Magnolia Pictures library and easily stands with some of their best movies. The great thing about this movie studio is that they take chances producing and distributing movies that no other movie studio would have the gumption to make. This along with 13 Assassins, Hobo With a Shotgun, Tucker and Dale vs Evil, and Black Death have made it a banner yer for Magnolia. I also forgot to mention Melancholia which has been hailed as one of the best movie of the year. I am looking forward to seeing what the studio brings to theaters in 2012 and beyond.

The studio also has a knack for bringing actors into their movie we have not seen in a while and get them to give amazing performances. David Hyde Pierce is really the best part of this movie and show that he could absolutely carry a movie on his own. This movie also shows his range as an actor because he has to go from being extremely serious and threatening to being funny and elated all with minutes of each other. At points you really do get the sense that he is a very dangerous character and could really pose a threat to any character in the movie. Clayne Crawford also does a great job with his part in the movie, and this role could allow him to be considered for more high profile roles.

Overall, this is a movie that really should be watched. This movie is a high quality serial killer/thriller and has one of the best performances of the year in my personal opinion. Watch this movie if you want to see a movie that has a fresh take on a stale genre and you want to see some truly great performances. Take the time to watch this movie instead of some low quality big budget Hollywood movie and I guarantee you will not regret your decision.
Posted by Unknown at 2:50 PM