Night of the Creeps 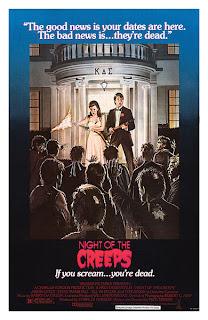 Night of the Creeps is an essential cult horror movies for every horror enthusiast. The cast is fantastic and the story is great for being considered a small B-movie from the mid-80s. This is not a zombie movie but is an alien/horror movie which is not directly stated anywhere in the promotion of the movie and most reviews call this a zombie movie. This is a great addition to the horror genre because it actually uses realistic characters and they do things that everyone might do in their given situation.

The plot involves an alien experiment being jettisoned from a spaceship and the experiment land on Earth. This happens in the 1950's, and the body of the man who was infected by the experiment is put "on ice". The plot then skips to the mid 1980s where two friends join a fraternity so one can impress a girl. Their initiation involves finding a cadaver and instead they find the frozen body. Shenanigans ensue and then the experiment, which are alien slugs, is unleashed upon the college town and all of its residents. This is the time when the aliens start taking over co-eds and start reproducing more slug forms and this is when the action really picks up. There is also a side plot that involves a detective who encountered a killer in the 1950s, who killed his high school sweetheart, and the killer is resurrected by the aliens.

This movie is pretty incredible when you factor in that it was probably made with a shoestring budget and a lesser known cast. The acting is believable and the situations that the characters are put in are realistic as they possibly could be in relation to the subject material. The fact that the characters don't just walk into situations like a bunch of idiots is impressive for a horror movie and is really a breath of fresh air. The main hero, Chris, is scared and that is logical but he tries to protect the people he cares about and tries to help others around him as well. His friend, J.C, looks out for Chris the best he can and really acts like a best friend and not a selfish prick like most characters do in these type of movies. As you can tell I really like this movie and feel like it is a really effective movie.

The special effects are great because they are all done as practical effects for the most part. The way the infected characters are shown is very similar to that of a zombie but the heads of the infected will randomly open and reveal more slugs when they are done gestating. Just a really great concept in an exceptional movie. Even the main female character, Cynthia, defies genre conventions. She is cut from the same cloth as Ellen Ripley of the Alien series, she is frightened of the threat at first and then overcomes that fear and starts dealing death to the slug bastards. This is what I mean when I say that the characters act rationally in the situations in the movie, they fight for their lives and the lives of the people around them and that is a great thing to have in a horror movie. Adding elements of reality in a movie about an unbelievable situation really grounds the movie and allows the viewer to connect with the characters and the plot.

I flat out love this movie, and people may rip on it for being a B-movie, but I think that fact only adds to how great this movie is. If all B-movies took the time to develop their plot and character like Night of the Creeps did then they wouldn't be considered B-movies. If you liked the movie Slither or cult horror movies in general, treat yourself to this movie. You will really only find it on Blu-Ray or DVD and it is really worth it. I promise you that you will at least find one entertaining aspect to this movie even if you are not a huge fan of horror movies.