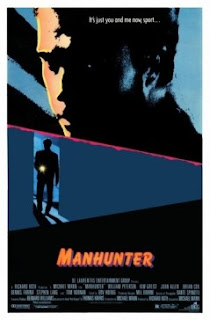 For everyone's information this is Hannibal Lecter's original appearance in a movie. This is the "original" in a series that is most times forgotten due to it being made without any of the same cast as the following films. This was not a hit when it first debuted but it sports a cadt that would be considered in today's terms to be star studded. It stars William Petersen fresh off the success of To Live and Die in LA and years before his success in CSI. The cast also consists of Brian Cox, who is the original Lecter, Stephen Lang, Joan Allen, and Dennis Farina. This movie feels slightly less Hollywood than the remake of it that stars Edward Norton and Anthony Hopkins. There is a gritty feel to the movie that you just don't get with today's movies, its just the way that movies were shot in the 80's.

The movie follows Will Graham (Petersen), a former FBI investigator, who is thrust back into service when there is a series of serial murders that seem to have almost no motive when looked at from afar. Graham has a history with Lecter being the man who finally captured him but at the cost of being stabbed and cut multiple time by Lecter in the process leaving him both scarred mentally and physically. He is on the hunt for the new killer dubbed "The Tooth Fairy" because he leaves bite marks on the older females victims and then kills them and then their entire family. At the start of the movie he had killed two houses worth of families. Graham tries to protect others and his family from the killer while trying to find out what fuels "The Tooth Fairy" to kill and mutilate. The whole movie is a cat and mouse game to see how Graham can flush "The Tooth Fairy " into the open and make any type of mistake at all.

This movie also marks one of Michael Mann's first theatrical productions and in my mind does a very good job with the material he is given. He has gone on to make some of my favorite movies and has established himself in Hollywood as both a successful director and producer. Mann has a certain style to his camerawork that is not overly apparent in this production. In this movie there is a certain grittiness to this movie and that is apparent in most of the scenes. The movie also does not overuse music as a lot of movies in the 80's tended to do.

William Petersen in my opinion was the best person to play Will Graham considering the other actors that could have been cast in the 80's. He really knows how to do the hard boiled grizzled veteran cop, who is coming back from one more case. I've seen several reviews that say his acting is wooden and feels forced but I just don't see it. Of course not every line of dialogue is going to necessarily hit the mark all of the time, but there isn't anyone who could really pay this part any better. Edward Norton certainly couldn't do it, and Red Dragon was hailed as a superior version of this movie. Cox as Lecter is a little jarring at first but he is used so sparingly that it really doesn't have a great effect on the movie overall. Anthony Hopkins will always be Dr. Hannibal Lecter no matter what anyone says. Cox does an effective job with the role but people also have to remember that this was made prior to Silence of the Lambs. Stephen Lang also plays a dirtbag photographer/reporter who has one of the most deserved deaths in any movie. It is truly spectacular when you see it on screen.

Overall this is one of the better crime movies that I have seen from the 80's and in my several viewings of the movie I have liked more and more about it each time. This is a well acted and smart thriller and has achieved cult status in the years since its initial release. This movie had great casting as opposed to the remake which was miscast in many of the supporting roles which ultimately doomed the movie to mediocrity. Gives this movie a shot is you like older CSI and have an interest in what spawned the Silence of the Lambs franchise.
Posted by Unknown at 9:00 AM