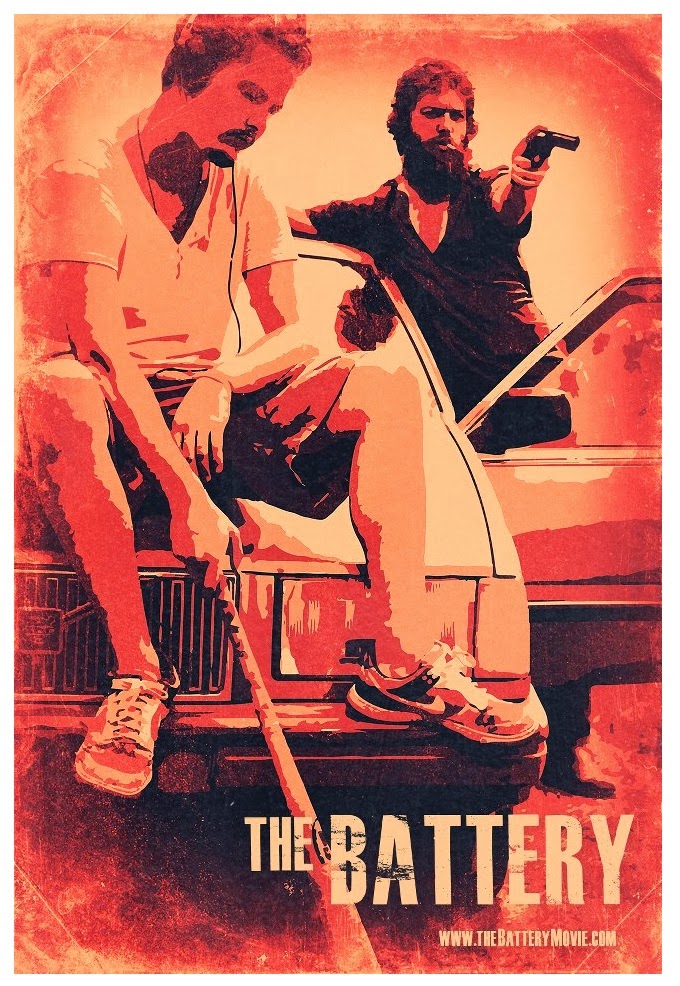 Hollywood has a tendency to take what is successful and milk that concept until it is withered and useless. Horror movies seem to be the easiest for the studios to milk because they cost very little to make, thus making it easier to turn a profit. Zombie movies are the new "hot" item and seems as though each one is more generic than the last, with no foreseeable end in sight. The only way it seems that you are able to get an exceptional horror movie made is to do it independently, or ask a studio for a ridiculously small amount of money. The creators of The Battery took the independent/no money route and made one of the best horror movies that I have ever seen.

The Battery follows two baseball players, Ben (Jeremy Gardner) and Mickey (Adam Cronheim), as they traverse the backwoods of New England trying to survive the zombie apocalypse. Ben is perfectly fine with it just being the two of them, moving from place to place in order to survive. Mickey, on the other hand, longs for civilized society and the way things used to be. When a third-party, Annie, is introduced into the equation,  Mickey becomes obsessed  with her. This leads to greater threats than the horde of zombies roaming the countryside.

The first thing that I need to mention about this movie is that it was made for $6000. Let me say that again, $6000. It is incredible what passion, ingenuity, and a decent camera can get you. Jeremy Gardner, who is the star and director, used a Canon 5D to shoot this and the results were incredible. The movie looks excellent from start to finish, and it is incredible what they did with a consumer-level DSLR. If a studio has the balls to give this guy a larger budget and a better camera, I am willing to bet that the result would be incredible.

I know I mentioned earlier that this was a "zombie" movie, but they are in the background for most of the movie. The relationship between Ben and Mickey takes center stage throughout the course of the movie. Ben is the survivalist of the pair, and looks like a modern-day caveman. Mickey longs for the way things used to be, and is generally seen as kind of a pussy. Ben gathers the food, and kills the zombies that they encounter. Mickey seems to just exist in this situation and offers nothing. Their relationship is a symbiotic one, with Mickey keeping Ben mentally sane, and Ben keeping Mickey out of harms way. You can tell that they didn't like each other before the outbreak but are now forced to rely on each other to survive this messed up situation.

There are so many situations in this movie that I can see happening to regular people if the zombie apocalypse ever took place. Dancing around drunk, playing catch, jerking it to zombie tits, hoarding your girlfriend's panties, and teaching people how to kill zombie. You can count me in for everything except for the 3rd and 4th ones. I can believe that I would survive for a while, but who the fuck knows. I guess that is the magic of this movie, you believe that what the guys are doing is exactly what you would be doing in the same situation. Things that we take for granted such as brushing your teeth or a simple game of catch are euphoric for Ben and Mickey, showing the extent of fall of the world around them.

I love horror movies, and I don't need gore to make something enjoyable. This movie is gore-free for the most part, and chooses to focus on the mental wear that is put on Ben and Mickey. Ben has the weight of the safety of the pair on his shoulders and the idea of civilization dying off has made Mickey an empty husk. No scene better illustrates the mental strain on these guys better than when Mickey is cornered in a car by a topless zombie. Mickey is safe in a car and the topless zombie is scratching at the window from the outside, and then he just decides that it would be a good time to jerk off. What the fuck? This would not have been in my thought process but to each their own.