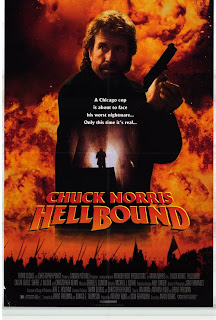 This is easily the worst movie I have ever seen. Everything is horrible about this movie, the story, acting, special effects, and the casting. The casting is ridiculously terrible, Chuck Norris as a tough as nails cop fighting a demon with kung-fu. That statement alone is tragic. Norris is really, really bad in this movie. His acting is at best atrocious, and at worst embarrassing. Also the Rick James look alike that was hired to be his partner in the movie is pretty bad as well. He is better than Norris because he actually makes you laugh at points and actually shows emotion through the course of the movie. I really hope the director of this movie never directed a movie again. The villain in this movie is also incredibly corny and gets the shit kicked out of him by Norris' kung-fu which makes no sense because he is super strong and is invulnerable. Fucking terrible is the best way to describe every aspect of this movie or atrocious would be a nicer way of describing it. I really don't want to keep writing about this movie because it keeps making me think of it and I never want to think of this movie ever again. Save yourself the trouble and never watch this piece of crap.
Posted by Unknown at 9:11 PM