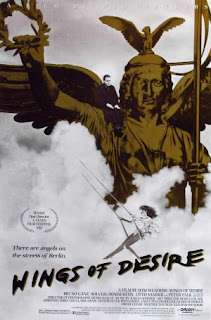 Wings of Desire is one of the first real art house movies that I have actually sat down to watch to the end. While there is no real main conflict or antagonist in the movie, I was fully engaged the entire time and loved how the story progressed. Wim Wenders is a true visionary and grabs you with the way the movie is shot, as well as the overall story of the film. He uses a new take on angels to bring a fresh and captivating story to the screen.
The angels in the movie are observers of humans and can never really experience emotion and have never been able to physically feel anything before either. The twist is that the angels can renounce their immortality in order to become human and fully experience everything that they have been observing. The mixture of monochrome color and full color is also a great way to shoot the movie. When the main character, Damiel, is in his angel form the screen is in black and white. Later, the movie becomes full color after he becomes human. The use of color is to show how vivid and full of life our world is, even though we might not notice it all the time.
Bruno Ganz is arguably the best part of the film overall. His character, Damiel, is very quiet and reserved when he is an angel but you can see that he longs to experience everything that he has been observing. He longs to love, feel pains, and do things that we find to be arbitrary. For someone who has no idea of what he is going to experience, he is very full of life more so than a lot of the human characters in the movie. His evolution over the course of the film is what really drives the movie and the way he interacts with people after he becomes human is so innocent and sweet. For instance, he stops a man to ask him which colors are which and you can see that he is visibly excited to learn what each color is. Its small moments like this in the movie that let you appreciate the brilliance of both the acting performance and the direction of the movie.
I have only seen two of Wim Wender's catalog of movies, but after seeing this I am really excited to see some of his others. He has a truly unique way of filming a movie and the way he shapes and frames the story is just magnificent. The characters that he creates seem just like normal people and that is what allows the viewers to care about them. They also act rationally and each character is engaging for different reasons. The angel sequences have an almost "dream like" quality to them while the human sequences have really bold and accentuated colors in them. Everything he does in his shots serves a purpose and pushes the narrative forward.
I feel like I should be able to write more about this movie but I feel like it would get a little repetitive. What it comes down to is that this is a magnificent movie and really needs to be seen by everyone. Just keep in mind that 90% of the movie is in German and there are subtitles which might throw some people. Bruno Ganz give an unbelievable performance and his character is one of my favorite movie characters of all time. This is a 9/10 in my opinion and that score will probably go up when I watch it again.
Posted by Unknown at 8:50 PM