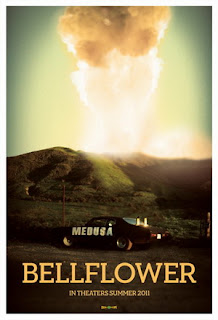 Today, I was bored at work just like usual and I stumbled upon this movie in iTunes. For 99 cents, I figured that I couldn't really go wrong. This is a movie that I heard quite a bit about after Sundance last year and never got around to watching it so it kind of surprised me that it was so cheap. My expectations really weren't high but I can say that this movie was actually pretty great for a low budget love story with apocalyptic overtones. Great way to describe a movie isn't it.

The plot is a fairly simple love story until about halfway through when it becomes something that I would rather not spoil at this moment. The actors in the movie may not be of the highest quality but they are all believable in their roles. The best of the bunch are Evan Glodell (also the writer and director) and Tyler Dawson, who star as Woodrow and Aiden. Each of the actors breathes life into their characters and you feel for each of their situations. Woodrow is a hard luck loser in the movie who has his heart broken and Aiden has to try and piece back together his best friend. It also helps that they are obsessed with Mad Max and are into building flamethrowers and tricking out muscle cars. It is a lot better than I make it sound, I promise.

What also impressed me about the movie was the way that it was filmed, there are dirt flecks on screen at all times and the movie just looks different from anything that I had seen previously. Glodell also happened to make his own camera by piecing together one from other cameras and that is what gives the movie such a unique look to it. If you take the time and actually watch the movie, it is a lot deeper than it is described by people who have seen it. There are also several well planned twists in the movie that are pulled off really well and you really have to watch into the credits to get the entire story.

This is one of those independent movies that is destined to be a cult classic and be played at midnight in a theater down the line. Really well thought out story, believable characters, and above average acting. A very quality film for a newer director/writer/actor. Looking forward to seeing what Glodell could do with a larger budget and better actors. 8/10
Posted by Unknown at 8:12 PM