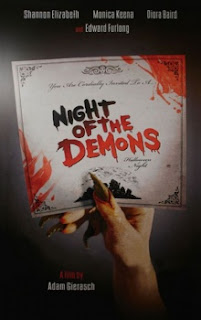 Night of the Demons is one of the few remakes that is actually better than the original. Not to say that this is an outstanding movie but it is certainly better than the B-movie that it spawned from. Anytime you have Shannon Elizabeth as a leading actress in your movie, you know that tits were more important than acting ability. The original John Connor (Edward Furlong) also stars in the movie and he really hasn't done anything relevant since Judgement Day. Also in keeping with the B-movie theme, the lead actress from Freddy vs. Jason is the main character of the film, just awesome. Just like with the original, the acting in the movie is just below the Twilight films in quality and the story is mildly convoluted.

The thing that saved this movie from being complete and utter shit was the inclusion of Diora Baird. She is by no means a talented actress but she does provide enough to look at (ex. Her boobs) to make the movie bearable. The special effects were also surprisingly good considering the shit quality of the rest of the movie. Almost all of the effects used are made so using practical means which is a welcome surprise from a genre of film that is beating CGI to death lately. The kills are pretty gruesome which adds to the watch-ability of this disaster. The movie is at points so bad that it actually seems good. The original tried to go more of the horror route whereas this movie tried to add a lot of dark humor into the mix, and the results were mixed to say the least. This was a remake that really stood no shot of actually being very good. The actors were mostly talent-less and the story never really grabbed your attention. If you want to see a movie so bad that is laughable then by all means sit down and watch this movie.

Overall, this movie and the original are both terrible movies with the remake being the better of the two. There is really no reason to see this movie other than to see Diora Baird's tits and see Edward Furlong get killed on screen. Other than those two things the movie really has nothing to offer. If you decide to watch this, then good luck to you because you will certainly be wasting 90 minuted of your life.
Posted by Unknown at 5:07 PM