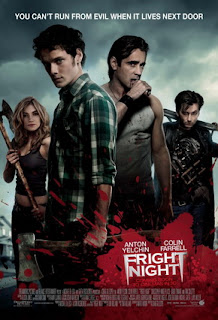 This movie was just plain fucking awesomeness. Everything about this movie was great. The acting, story, and action were all top notch for a horror movie. I am a fan of the original and this movie outdid it in almost every conceivable way. The cast consisting of Anton Yelchin, Colin Farrell, Imogen Poots, Toni Collette, and David Tennant is superb and this is an amazingly talented cast for a horror movie. In a horror movie you may be lucky to get one or two talented actors, not five. If you noticed I did not mention McLovin from Superbad in the cast list because he fucking sucks, alot. I really enjoyed the slight tweaks to the movie to update it for modern times and the differences are subtle enough where if you were a fan of the original it won't effect your opinion of this movie.

I am not going to spoil the plot for this movie and I will instead give you an honest opinion on this movie as a whole. Everything in this movie is spectacular except for the special effects. There are moments where the CG looks like it is from the early 90's and it throws you for a loop at first but you get used to it. Anton Yelchin will be a major Hollywood star, mark my words. He carries each scene that he is even when going up against Colin Farrell and David Tennant on screen. Yelchin easily blends into his characters and I have seen alot of movies with him in it starting with Charlie Bartlett. Can't wait to see him continue as Chekov in the Star Trek franchise. This movie also marks one of the first times that Colin Farrell is tolerable on screen. He kills it in this movie with his performance as Jerry and steals almost every scene that he is in. He really portrays his character as a shark in human form and that is exactly the type of vampire that the silver screen needed to counter the shit nuggets in Twilight. David Tennant also brings a breath of fresh air to the character of Peter Vincent, because in the original he is a lame television host and in this movie he is a Criss Angel ripoff. Everything about the character works, he has the funniest lines in the movie and is probably the most interesting character in the movie once you learn a little about the character's background. I am a huge David Tennant fan from the Doctor Who run he had a few years ago which was incredible. He is a great actor and really deserves to get more roles because people need to see what he brings to the screen. Imogen Poots and Toni Collette provide the eye candy for the movie. Poots is just flawless, unbelievably hot would be a euphemism. She does a good job with her character as well, and Collette plays Yelchin's hot mom that Farrell's character has his eyes on.

It really is a shame that more people did not see this movie and it was pushed to the mid-August death slot for movies. This movie really should have been released in mid to late October to gain a larger audience. This eclipsed my top 5 for 2011 and that's comparing it to some great movies. Watch this movie and you will get equal parts action, humor, and horror. You also get the pleasure of seeing the smoking hot Imogen Poots, who might have one of the worst names ever. This is a 9.5/10 and I don't give a shit what anyone else says.
Posted by Unknown at 9:12 PM