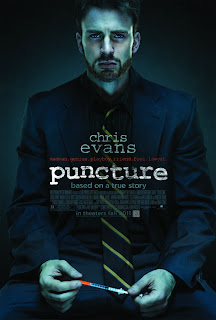 This movie featured my favorite acting performance by a male of 2011. Chris Evans controls the movie every second he was on screen and influences you even when he is not on-screen. The movie itself isn't too shabby either and edged out Crazy, Stupid, Love out of my top ten of 2011. The movie is just really well crafted and tells a story that hits so close to home for so many people just because of the amount of people that work in the medical industry. Evans is the only recognizable star in the entire movie and that works wonders for this movie because a majority of the movie is about his character's struggles with substance abuse and balancing that with his work life. That is another topic that many people can relate to, dealing with addiction. This is highlighted throughout the movie and comes to a head at a point in the movie where you really see how much of a toll the abuse has taken on his character's body. Everything in the movie is awesome and people really need to go and rent or buy this movie even if it just to see Evans' performance.

The only problem I had with the movie was how abrupt the ending was. I am not going to spoil anything but at one point you feel like the movie is going to kick into another gear and then it ends within 5 minutes. After doing some research on the case portrayed in the film the ending does make sense. But if you know nothing about the case then it does end rather abruptly. The movie does tackles some really important issues such as workplace safety, substance abuse, and corporate greed. Each subject is explored in great detail and there are no useless subplots in the movie. The focus of this movie is a great strength because it never deviates from its path and is always engaging. Really sounds like I hate this movie, doesn't it? This was one of my top ten movies of 2011 and it really deserves that honor. A stellar performance from Captain America helped this movie go from being an engaging drama to a fantastic character driven story. Chris Evans is a fantastic actor and it is nice to see him act in smaller movies outside of the Avengers franchise because he is going to be doing those movies for the next 15 year. If you are a Chris Evans fan then you also should check out the movie Sunshine, one of my top ten science fiction movies of all time.
Posted by Unknown at 9:54 PM