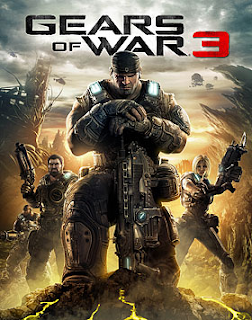 Other than the Uncharted franchise this is the next best franchise in video games in my honest opinion. The characters in the franchise may not be the deepest but they are some of the most engaging and exciting in the industry. Marcus Fenix and Dominic Santiago are two of the best characters in the XBox'a stable of characters. They are brothers in arms and will fight to the death for each other ad that is showed time and time again over the course of the three games. I am not going to spoil any of the plot but I will say that this game does bring the trilogy to a satisfying close and hopefully they can explore the history of the game's universe in the next series of games in the franchise.
In terms of technical excellence, this game rivals anything else in the market. The graphics have a gritty beauty to them and the violence is visceral. When you perform an execution on another character it is brutal which is just the way it is meant to be. The are explosions on screen, a couple of dozen characters, and massive stalks coming out of the ground without so much as a hiccup in framerate. This allows for an uninterrupted gameplay experience that allows you to be fully immersed in the game without having to worry is the game is going to freeze or slow down for an extended period of time. The sound is also top notch, if you have a home theater system hooked up to your XBox then you will definitely get you moneys worth. The is an epic score that goes along with the game and it really highlights each of the larger action set pieces in the game. The cutscenes are also very high quality. They use similar graphics to the gameplay so it keeps you in the mindset that the game is still occurring. In some games the cutscenes are way too long and really take you out of the action which sometimes hurts the flow of the narrative.
The gameplay is mostly unchanged from the two previous installments and that is a wonderful thing, if it ain't broke don't fix it. The shooting mechanics are top notch and rival any other third person shooter in that category. The objectives are pretty basic with the same get from Point A to Point B or move this item here but the action that take place during the objectives is what makes this a Game of the Year contender.
If you have an XBox then you owe it to yourself to play this game. It is one of the best games for the XBox that will ever come out. The action, graphics, characters and story make this game a must own and the multiplayer is also very good. Not quite Modern Warfare quality but the multiplayer is better than 95% of games out there. This game is a 9.5/10 and is a must play and must own for XBox owners.