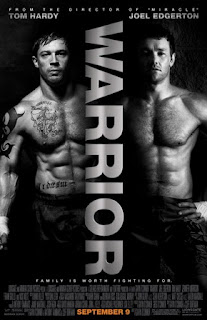 Warrior is 2011's answer to The Fighter, they are very similar in tone and story but Warrior is the more engaging of the two movies. The combined performances of Joel Edgerton, Tom Hardy, and Nick Nolte carry this movie from beginning to end. This movie was marketed as a pure MMA movie but that is really only a small portion of what the movie is truly about. This is one of the first movies that allows US audiences to get a good look a the acting talents of Tom Hardy and Joel Edgerton, and it showcases their acting talent and also their ability to each carry the dramatic weight of the movie. This is a fantastic movie that displays how strong the bonds are between family members and also how everyone deserves a second chance.

If you watch the trailer you will get an overall idea of what the movie is about. What the trailer does not show you is how each of the brothers reacts differently to their situation and how they are not that much different from one another. Brendan(Edgerton) has been able to adapt to the horrors of his past and work through the trauma that came along with those events. Tommy(Hardy) on the other hand is unable to let go of the anger that has built up within him stemming from similar experiences that Brendan went through. Tommy was trained by his father to be a world class wrestler but his father was a drunk and constantly abused the family. Paddy(Nolte) is trying to reconnect with his sons in any way that he possibly can. He starts to train Tommy for an upcoming MMA tournament and sees Brendan from afar when he sees him fighting in the same tournament. Tommy and his father have the most hostile of relationships because Tommy no longer even considers Paddy his father due to him leaving him and his mother. Over the course of the film, we see as Tommy begins to understand his father and finally forgives him after an argument leads Paddy to drink again for the first time in 3 years. Each of the men find their own way of forgiving each other and that really shows how unconditional love does exist.

This is a very good movie, it just ran into a buzz saw in terms of movies that I have seen recently. The quality of this movie diminished a little due to the awesome movies that I have seen recently such as Midnight in Paris, Another Earth, Hanna, and Drive. This movie is just not as complete as those movies ion my honest opinion. Hardy and Nolte give exceptional performances with Nolte really stealing the show. His character had the longest road to travel to redemption and he has a great journey over the course of the movie. This movie deserves a 8/10 and really is worth a viewing.
Posted by Unknown at 8:43 PM