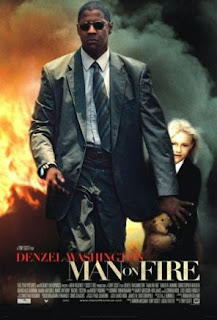 Man on Fire is one of those movies that really takes you by surprise and holds your attention for the entire runtime. I am by no means a Denzel Washington fan but this is the movie he was born to be in. He captures the viewer's attention every second he is on screen and is a complete bad-ass 99.99% of the time. He gives an unbelievably great performance that was ignored by critics because they felt the movie was needlessly violent and the movie received many less than positive reviews when it was released in 2004. I was it when it came out in 2004 but had no real appreciation for the story or the complexity of the characters in the movie. On another note, this is not the first adaptation of the story in movies, with the first being a 1987 film starring Scott Glenn.

The movie tells the story of John Creasy, who is a former Marine Force Recon officer, that is looking for work to essentially support his drinking habit. He has a former colleague, played by Christopher Walken, that tells him to come to Mexico City so he can find some work as a bodyguard. Creasy soon comes into the employ of a wealthy family living in Mexico City and he is tasked with protecting the daughter, Pita played by Dakota Fanning, who has been out of school because there has been a string of kidnappings in Mexico City. At first Creasy is uneasy in getting to know Pita and is against getting to know her in any way. Over time his guard is broken down and he begins to bond with her and becomes somewhat of a father figure to her because her real father is on business trips most of the time and does not spend time with her. She is then kidnapped after her piano lesson and Creasy manages to kill several of the kidnappers but is severely wounded in the process and Pita is taken any way. He is then charged with the deaths of several police officers because the men he killed were "off duty" police officers who help kidnap children for ransom money. This is where the movie kicks into high speed and Creasy's plan for vengeance begins. He then starts to systematically torture and murder everyone that was involved in the kidnapping.

FROM THIS POINT ON THERE WILL BE SPOILERS.

This is not a movie for the faint of heart and if you are squeamish about brutal violence then this may not be the right movie for you. Many critics did not understand why he was doing what he did and interpreted that he was taking pleasure in killing all of the people involved in the kidnapping. Everything he is doing is to avenge the supposed death of Pita and he will stop at nothing until all involved with the kidnapping are dead. When he finds out that she is still alive he is willing to give his own life for hers in order to let her live a full life. Creasy is a tragic figure from the beginning of the movie and sets upon a path of redemption that ends in his death. This is a fact that eluded many critics and I suppose they had it out for the movie once they saw just how brutal it could be. Do not listen to people who did not actually pay attention to the movie. Most critics are influenced in some way by their peers and contemporaries and that really skews their views in most cases. This movie is definitely worth a viewing and is a very good revenge movie.
Posted by Unknown at 7:46 PM