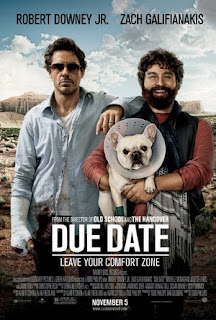 Due Date is another insane buddy comedy from the mind of Todd Phillips. This movie fits in with the rest of his movies and almost plays out like a toned down version of his other films if they were all combined together. Robert Downey Jr and Zach Galifianakis make a really good comedic duo. This movie is also not of the quality that I have become accustomed too with Phillips and his crew. I will get more in depth with that point later in the review. Galifianakis, just as he does in most movies he is in, manages to steal almost every scene that he is in. The duo of him and Downey is what carries a somewhat decent movie to be a good movie.

Due Date tells the story of an uptight businessman, Peter(Downey), and his quest to get back home to Los Angeles to be there to witness the birth of his child. He comes into contact with an aspiring actor, Ethan(Galifianakis), who wishes to make it big in Hollywood. Their first meeting could not go worse with Ethan getting Peter kicked off a plane, shot by an air marshal, and put on the no-fly list. When Ethan offers to drive Peter cross country, he reluctantly agrees and this is where the movie goes crazy with the situational humor. Through the course of the movie, there are a series of misadventures dealing with a hyper violent paralyzed veteran who has a penchant for making reservations at Chili's, a strange pot dealing couple, and a masturbating dog. All this time Peter is learning how to deal with people he can't get along with and also learns how to depend on other people for things. His flaws are also exposed over the course of the adventure and he learns that he must fix his flaws in order to be a good man and a good father. Ethan is in search for a friend and he finds that in Peter even though he puts Peter through hell, the situation becomes better through the movie.

This is a good buddy comedy, nothing Earth shattering, but is is a very well done comedy. The main problem I had with the movie is that nothing felt natural, a lot of the bits feel extremely forced and the viewer is guided to laugh. Great comedies get you to laugh at even minor things happening on screen or things that weren't planned to carry a scene. I never really felt that way at any point through the run time of this particular movie. If they had made a movie of just Galifianakis going across the country with his dog on a giant misadventure then that would have been great. I never really found Downey to be doing anything particularly funny through the movie, his character does not carry the scenes, he simply reacts to the outrageous things that Galifianakis' character does during the movie. His reactions in many scenes are priceless but at times they are just hurtful and aren't all that funny. The forced nature of the movie is ultimately what dampened the experience for me. Still worth a watch, its just not an essential viewing. Due Date deserves a 7/10, not a great comedy but is still a solid one.
Posted by Unknown at 7:36 PM