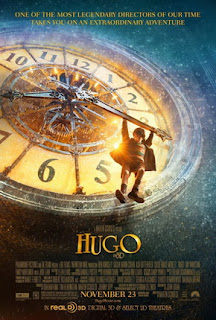 Hugo is a beautiful movie from the mind of Martin Scorsese. This is his love letter to early cinema and to the creators that preceded him. This is one of his less action packed movies and lacks the crudeness of a lot of his other films. This is a family friendly PG movie that also deals with a lot of grown up themes as well. The cast is excellent consisting of Ben Kingsley, Asa Butterfield, Chloe Moretz, Jude Law, and Sacha Baron Cohen. Scorsese does a superb job of getting the cast top give great performances and he also incorporates many elements from classic movies into this one that he does not usually use.

Hugo tells the story of a boy with the same name who has recently lost his father, and his search for answers. He lives in a train terminal in Paris and winds the clocks in the train station. He has an automaton that he and his father were restoring and he is searching for the key that will allow him to start it up and hopefully find some answers that he is searching for. He meets Isabelle(Moretz) while she is working at her guardian's shop in the terminal and they form an instant bond. They each help one another in their own personal journeys with Hugo taking Isabelle on an adventure and Isabelle giving Hugo the key to the automaton. The movie then takes off from this point and the real adventure starts. Taking the viewer into the minds of some of the earliest directors in Hollywood and showing what went into the movie making process in the early 1900s.

The main theme that runs through the course of the movie is the fixing of broken things and never giving up. Through the course of the movie, the character of Hugo has a compulsion to fix broken things, both mechanical and human. Each of the characters in the movie are broken in some way be it mentally, emotionally, or physically. Hugo is not really broken but he is looking for answers as to what he should do because he has been left with no one to guide him and he has to fend for himself. He helps mend the characters of the movie in all different ways and the most profound is with Kinsley's character who is George Melies, who was one of the first people to film surreal style movies. Melies in the fictional movie had renounced his film career after World War I because he felt people just threw away all of the art that he put his heart and soul into. Hugo finds a way to show him that there are still people who appreciate his work and this inspires him once again and he snaps out of his depression.

This is a fantastic movie that can be enjoyed by all age groups. People going into this movie looking for the Scorsese trademarks may be disappointed because this is totally different than his other works. This is a movie that sucks you in and gets you fully immersed in the story from start to finish. Just be aware that at times it is slow and takes some patience to get the story moving at a good pace. This movie deserves a 9/10 for bringing me back to a time when story ruled over sex and violence.
Posted by Unknown at 10:55 PM