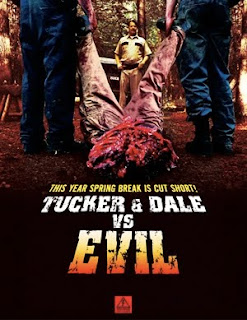 Tucker & Dale vs Evil was the best horror movie I have seen all year and upon a repeat viewing take the crown for being best movie of the year. This is also the best buddy comedy I have seen since Hot Fuzz. Everyone involved in this project seemed like they had a great time making the movie and it really translates onscreen. The fact that the writers turned the crazed hillbilly dynamic on its head and made the hillbillies the reasonable ones in the movie was a really inspired choice. Alan Tudyk and Tyler Labine also make a fantastic team and there should definitely be a sequel or another collaboration between the two in the future. This is the way that horror/comedy movie should be made. Get actors that have a great time working with each other and then find a story that is great to compliment them.

Tucker & Dale vs Evil tells the story of two well meaning hillbillies, Tucker(Alan Tudyk) and Dale(Tyler Labine), who are going away for the weekend to fix up their newly bought vacation home. At the same time a group of college students are going up to the same lake for a Memorial Day weekend trip. The college students are the typical "frat" types with the girls being airheads and the guys being Hollister model wannabes. One their first night on their trip, Tucker and Dale go fishing in the local lake and the college kids go skinny dipping at the same time. One of the college students, Allison(Katrina Bowden), falls into the lake and Dale dives in and saves her. The other college students think they are kidnapping her and this is where the story starts going into overdrive. The college students start to attack Tucker and Dale but in the process accidentally kill themselves in many situations because they are not the sharpest knives in the drawer. While the college kids are killing themselves, Tucker and Dale are trying their best to stay calm and do not realize that the kids are trying to kill them at all. While this is all going on, Dale and Allison start to have feelings for each other and get to know each other extremely well through this whole situation. Watch the movie and you will see that this movie is head over heels better than its competition in lost every way.

This movie does a fantastic job of going against genre conventions and telling an entertaining story that feels fresh. Using two lovable hillbillies as the main characters was a great idea because they seem like two normal guys just trying to get some work done and have a good time at the same time. The college kids in the movie are pretty standard characters with the rich white kid, token black guy, and the airhead blonde. Nothing really changes in horror movies when it comes to the college kid archetype. As they say, "If it ain't broke, don't fix it". Dale is the main focus of the plot because he is an underdog in almost every way. People think that he is stupid, ugly, and useless. Over the course of the story we find out that he is extremely intelligent but lack book smarts and he is charming without really trying. The character, Allison, comes to see all of this over time when she lets her guard down and actually interacts with Dale. The buddy dynamic is also something that is not usually used in the horror genre because most of the time characters are isolated and then killed off one by one in the movie. Tucker and Dale are rarely separated from each other in the movie and when they are they are extremely vulnerable and left open to attack. This is the story of how strong the two characters' friendship is as well as being an amazing horror/comedy.

After seeing this movie for a second time, I can truly say that this is the best movie I have seen all year. Tyler Labine and Alan Tudyk are a great comedic team and should really think about teaming up for another movie in the future. Katrina Bowden is also an up and coming talent who really is a talented comedic actress, so she has the brains to go along with the beauty. This along with Children of Men are the only two movies that I have seen that really deserve a 10/10. This is easily the best or one of the best movies that you will see all year.