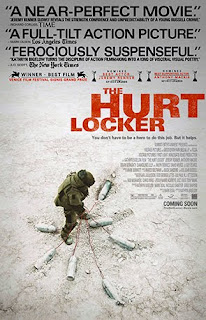 "The rush of battle is a potent and often lethal addiction, for war is a drug.". This is one of the best quotes that can describe what is going through the minds of the three main characters in the movie and how each is affected differently over the course of the movie. This is one of the most poignant movies in recent history and one of the most important movies of my generation. Jeremy Renner and Anthony Mackie give standout performances but Renner is definitely the star of the show. He gives one of my personal performances of all time and he was jobbed the year he was nominated for Best Actor. This is one of the finest movies about the war in Iraq, the only other movie dealing with the same type of subject is Restrepo. This one of the first movies dealing with our war in the Middle East without using grand over the top set pieces and tried to tell an actual story.

The Hurt Locker tells the story of an EOD unit in Iraq in the early stages of the American occupation of the country. The unit consists of Sergeant James(Renner), Sergeant Sanborn(Mackie), and Specialist Eldridge. James is the ordinance disposal specialist and Sandborn and Eldridge support him on their mission. James becomes their team leader after their previous team leader was killed in the line of duty. James is very good at his job but is unhinged in almost every way, taking chances with both his life and the lives of his teammates. Sandborn is the voice of reason and tries his best to keep James in line at every turn and Eldridge is the "rookie" of the group and is more impressionable with his allegiances changing through the course of the movie. Over the course of the movie, we see the team as they evolve and how each escalating situation takes a toll on them both mentally and physically.

Sanborn is the most interesting of the characters in my opinion. You can see that he truly believes in what he is doing and that he is helping people on a daily basis. He understands why they are there and his main goal is to keep his team safe then he worries about everything else. When his team is put in danger he will throw himself in the line of fire for his teammates, but has no tolerance for anyone putting his team in needless danger which his team leader does on several instances. There is a rage that you can see is boiling beneath the surface with him and you see him snap at times during the movie because the situation he is in is overwhelming him and he needs to let his frustration out. He recognizes that he needs more in his life and feels like he will be an afterthought if he is killed. By the end of the movie he comes to the realization that he wants to start a family and get out of this violent and dangerous setting that he is in. On the other side there is Sergeant James, who loves his job and feels at complete ease during the most tense of situations. James is in love with his job and comes to realize that he is not suited for normal life and can barely function around his family on a day by day basis. You do begin to see cracks in his macho exterior when he thinks that a kid he becomes friends with in Iraq has been killed. He freaks out and goes after the people that he thinks is responsible but then finds out that the kid is not dead. He is fully invested in the war and feels like this is the only place that he belongs. Whereas Sanborn breaks away from the addiction of war, James fully embraces it and continues to feed his addiction.

This is one of the best movies of my generation and really shows how war effects all types of soldiers in different ways. Renner and Mackie dominate this movie and give some of the best performances that I have ever seen. I will be a fan of Renner and Mackie for their entire careers due to this movie. This is a must see for anyone of my generation or anyone who has been affected in any way by the ongoing Middle East conflict. The Hurt Locker is a personal favorite of mine, it may not be the most uplifting movies I have ever seen but it has one of the most engaging stories that I have ever seen. A 10/10 for this movie. If this movie does not effect you in some way then you have no soul and may want to stick to your shit movies.
Posted by Unknown at 8:31 PM