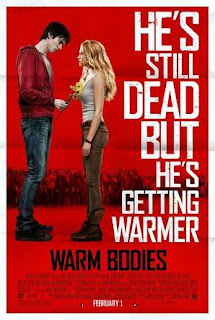 Of all of the zombie movies that have come out over the last few years, this was the one I was least looking forward to seeing. This is a movie that I had no desire to see and only saw it because a few horror fanatics that I know recommended it. I thought that it was going to be the Twilight of zombie movies and I am extremely happy that my predictions were wrong. It takes what has become a somewhat stale genre and injects some new, fresh ideas into it. The mixing of Shakespearean themes and horror turned out to be a pretty badass combo and I delve into it a little more later in this review.

Warm Bodies tells the story of R (Nicholas Hoult), a young zombie, who is still able to think and even voice some basic words. R wanders around an abandoned airport with his fellow zombies while the last remnants of human society are contained to a walled off city. Julie (Teresa Palmer), the daughter of the leader (John Malkovich) of the humans, goes on a supply run and runs into R and a pack of zombie. In the ensuing chaos, Julie's boyfriend is killed, and R take Julie to safety. Unknown to Julie, R killed her boyfriend and ate his brain. By eating his brain, R begins to feel love and an attraction towards Julie. From this point on it is a battle for survival and learning that things aren't always what they appear to be.

This is a PG-13 zombie movie, so don't look for a ton of gore and over the top zombie kills in this one. The story is the primary focus of the movie. The trailers for the movie made it seem hokey and tried too hard to appeal to the Twihards. The themes of the movie are love conquering the hardest of circumstances and holding on to your humanity no matter how dire a situation may be. Some of the zombies hold onto pieces of their humanity despite being reanimated corpses and they yearn to be alive once again but have no idea how to get back to that point. At points they are more human than the actual living humans, who have become cold and uncaring as a result of the destruction of most of the world's population. The whole movie is about R's redemption and his will to live despite the circumstances he faces. The love conquering all obstacles centers more on his growing love for the beautiful Julie. All of the obstacles put in front of R deal with keeping him separated from Julie in some way and his love for Julie is what powers him through all of these trials.

The Shakespearean overtones of the movie are really limited to the main characters having names beginning with R and J. They come from different "families" and are not supposed to be together. But fate brings them together and a forbidden relationship begins. The more depressing aspects of the Romeo and Juliet story are thankfully left out of this movie, such as the annoying family members and the suicides. The R and J connection is more than likely lost on a high percentage of younger viewers but I did enjoy it because I have never seen Shakespeare mixed with horror before.

This is a very solid horror movie and at no point did the lack of gore or nudity take away from how enjoyable this movie is. Hoult and Palmer are excellent in their roles and Hoult really has to show his acting chops in this movie because for a good portion of the movie his character is barely able to speak and has to convey a lot of things simply through his actions. His character also has to use music to convey his messages to Julie in their early meeting. Each has its own meaning and they play perfectly for each scene.

I recommend that you go see this movie. It might not be every one's cup of tea but it is good enough to counteract the lack of horror norms. The acting and story are the glue that holds this movie together and I wouldn't be against seeing a sequel to this in the future.
Posted by Unknown at 9:18 PM