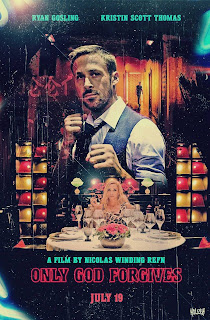 Only God Forgives is a movie that I have been looking forward to for some time. I am a huge fan of Nicolas Winding Refn and his last effort, Drive, is one of my favorite movies of all time. I attempted to go into this movie without seeing a ton of trailers and tried to ignore the early reviews of the film as well. After seeing this movie, I would recommend that you do the same, don't watch any trailers and definitely do not read the mainstream media's reviews of this movie. If you do, you will go in with a tainted expectation of the movie.

This movie follows Julian (Ryan Gosling), a small time Thai boxing promoter and drug dealer, living in Bangkok. His brother brutally rapes and murders a young girl and is "taken care of" by a policeman, Lt. Chang (Vithaya Pansringarm), who considers himself to be the "Angel of Vengeance". Things become more complicated when Julian's mother, Crystal (Kristin Scott Thomas), comes to Bangkok to bury her dead son. Her arrival sparks a series of events that brings death and destruction to the already chaotic streets of Bangkok.

Style over substance is definitely the main theme of this movie. NWR's movies seem to be "devolving" with each new picture. Bronson was a character study, Valhalla Rising upped the violence factor but still had a focused story, Drive upped the style factor and cut down on the character building, and Only God Forgives has almost no character development and over-the-top style. He still manages to make a thoroughly engrossing movie even when all of the factors point to it being a terrible movie. Other than the character not being likable, I thought this was a fantastic movie. Soundtrack was awesome, story was pretty good, and the movie is simply stunning. The way this movie is shot, just like all of Nicolas Winding Refn's movies, are freaking beautiful when they need to be and brutally horrific when the time calls for it.

The characters in this movie are not likable, and they really aren't supposed to be. Julian is supposed to be our "hero" and he is a morally reprehensible individual, dealing drugs and banging hookers. He kills for his mother and has to take her shit at every turn. His mother, Crystal, is a whole other story. She is one of the most disturbing characters that I have seen in quite some time. She berates her son in the worst ways, attacking him at the deepest levels and it is uncomfortable to watch at points. On top of the fact that she more than likely had an incestuous relationship with her older son and order the killing of her husband. Other than that she seems like a swell gal. Lt. Chang is the most interesting of the characters in my opinion. He truly believes that he is the "Angel of Vengeance" and deals out justice in the streets of Bangkok, anyway that he deems fit. He murders, tortures, and dismembers people that have come after him or committed crimes. He is looked up to by his fellow officers and hides this side of himself from his family. I really think the movie would have been better served focusing more time on him rather than the plight of Julian.

No matter what anyone tells me, I liked this movie and I thought it was fucking solid. It might not have been as incredible as Bronson or Drive but it was still better than 90% of the shit that Hollywood throws at us throughout the course of the year. I have come to the conclusion that the "style over substance" is a bullshit argument and people are generally too lazy to try and understand what is actually happening on screen. Most movies have more style than substance but it is never pointed out because most mainstream viewers don't give a shit. People going into an arthouse movie want a little more substance but sometimes you just have to roll with it. This is a  fantastic movie to me, if you don't agree then that is fine, just don't try and talk other people out of seeing this movie. Let them make the decision for themselves.

This is a solid movie that you really have to go into with no expectations. Do not listen to the naysayers who will try and talk you out of seeing this movie. See it and make your own determinations, it is the only way that you will be able to tell if you like it or not. I thought it was great, not as great as Drive or Bronson, but it was still right below them in terms of quality. Nicolas Winding Refn is a special director and I can't wait for him to take on a project with a "grown up" budget.
Posted by Unknown at 9:22 PM