E is for Extinction: Best X-Men story of All-Time? 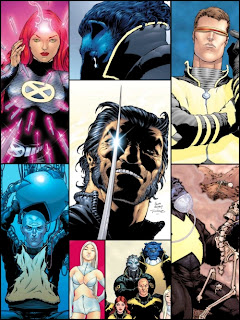 In the late-90s, the X-Men hit a creative "wall" where everything was just stale and old hat. The characters were boring and there was no momentum in the series. Marvel decided that they needed to reinvigorate their stale flagship title, X-Men, and handed the reins over to the mad genius known as Grant Morrison. Morrison is one of the best writers on the planet, not just in the comic industry. He has an amazing understanding of the characters he writes and has a habit of introducing some of the craziest fucking ideas you will ever read or see. He took the cast of characters in the X-Men and focused on a small section of them which included Jean Gray, Cyclops, Beat, Wolverine, Emma Frost, and Professor X. He added in the supporting cast consisting of the students that inhabit the Xavier's School for Gifted Youngsters.

E is for Extinction is the first arc in Grant Morrison's definitive run and is one of my favorite story arcs in comic history. The arc centers around the villain, Cassandra Nova, and her quest to eradicate the mutant gene from existence. We are talking full blown genocide, not a battle to kill one mutant, but to eradicate the race completely. She creates "wild Sentinels" which are not bound by directives and are able to adapt to certain situations which make them much more dangerous. She sends a few large "wild Sentinels" to Genosha, a sovereign mutant nation, and proceeds to murder 16 million mutants in a matter of minutes.  The arc deals with the ramifications of this act and shows us just how much of a force Cassandra Nova can be.

This was the first time that I had ever seen a writer of X-Men delve into the social issues that are inherent to the series. We see how many people in the Marvel Universe are outwardly racist towards the mutants simply because they are different looking. Most of the students at the school are horrific looking but most people never try and get to know them, they simply mark them as freaks and are scared of them. The character of Beak, a kid with bird-like features, is shunned by even some of his own kind because his outward appearance is categorized as grotesque. He is an extremely interesting character and ends up playing a huge role in Morrison's run on X-Men and has been sadly shelved by most writers since. The idea of mutants being closeted and hidden from the world is nothing new, but Morrison tackles the subject head on and it all comes to a head at the end of the arc, and it is spectacular.

Genocide was the most disturbing aspect to show up in this arc. There have been plans to eliminate mutants before, but they were mostly limited to regulating them and keeping them oppressed. Morrison takes it a step further and asks the question, "What if someone wanted to eliminate Mutants from existence?". This isn't a Scarlet Witch depowering people, this is bunch of massive Sentinel murdering millions of mutants in the blink of an eye. One of the most poignant scenes in the arc is when Xavier is in Cerebra dn you are seeing the count of the lives on Genosha just counting down to zero, and he keeps mentioning how he keeps seeing lights go out. That is him feeling and experiencing the deaths of millions of people, it is simply one of the most fucked up and disturbing scenes in comic history.

It was also really refreshing to see Frank Quitely, one of the best artists in comic history, not draw the X-Men as these buff and sexy protectors of the Mutant race. Most of the mutants are shown to be deformed by their mutations and even the main cast is not drawn as "pretty" as they normally are. Wolverine is a short, hairy, greasy looking bastard and Beast looks like a "beast", more animal than man. The rest of the main cast has their own distinct looks but those two stood out to me. Quitely has the ability to make all of his characters look very distinct and different from one another which is great for a series that focuses on so many character, each having their own different set of abilities.

This was just the first arc in what is the best run in X-Men publication history. Morrison did what so few writers are able to do, and made the X-Men interesting on a personal level with the reader. He made you invested in their lives, not just their actions, and that is the mark of a truly gifted writer. His willingness to tackle social subjects was a welcome addition to the comic world and his character creations were next level. The only other writer I have ever seen Marvel give this level of freedom with characters is Jonathan Hickman, and they are currently letting him do it with The Avengers. The overall craziness might not be there but they are letting him guide these huge conjoined story arcs with a main goal in mind and it is our job to see it through to its conclusion.

This is one of those times where I shouldn't even have to tell you to go read this. But, you need to go read this right now. The following two arc follow in the same footsteps as E is for Extinction, are excellent in their own rights, but this sits alongside Joss Whedon's "Gifted" arc in Astonishing X-Men as the best X-Men stories of all-time. Download it or buy it, just read it.