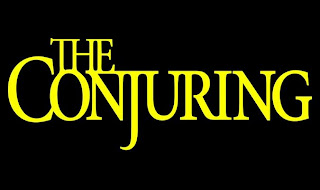 The Conjuring had me hooked as soon as it was announced, you have the team that created Insidious and some of my favorite actors making a haunted house movie, count me in 100% of the time. When I was at New York Comic-Con last year, this movie was revealed to the public for the first time and it looked glorious. We only got small pieces of footage but it looked incredible and I instantly wanted to see it. This was one of the only movies that I was excited to see this summer, and it did not disappoint. It might not have been Exorcist-level scary, but it was great regardless.

The Conjuring tells the story of the Perron family, who after moving into a house in rural Rhode Island begin to experience paranormal phenomenons in their home. The incidents are initially very minor and then culminate in the assault of one of their daughters by an unseen entity. The family calls in Ed and Lorraine Warren (Patrick Wilson and Vera Farmiga), famous paranormal investigators/demonologists, to investigate the events that are occurring in the house. When the Warrens come on the scene, they begin to unravel the mystery behind the events and try to save the Perrons in the process.

This was a really, really solid horror movie. It wasn't Exorcist-level frightening but it was one of the scarier movies to come out in the last few years. What this movie does better than most is creating a sense of tension. In most scenes there is a palpable sense of tension and sometimes it is just to mess with you and other times it is there to scare the shit out of you. There is a gore-less horror movie for the most part and it did not detract from the movie at all. I love gore in horror movies but there are times when it isn't needed and this is one of those cases. Tension and dread are the only things that this movie needed to get the job done. The first ten minutes of the movie set the tone for the entire movie and it introduces the creepiest dolls in movie history.

Whoever was in charge of casting for this movie did a phenomenal job. The four main actors (Patrick Wilson, Vera Farmiga, Lili Taylor, and Ron Livingston) did a fantastic job, with Wilson and Farmiga being the standouts. Of all the surprises in the movie, the biggest one to me is the quality of the young actors in the movie. Each one had their own spotlight moments in the movie and they added to the realism of the story. Taylor, Livingston, and the kids were integral in the success of the movie, because without them acting as a family, the movie would have fallen flat. Wilson and Farmiga have a great chemistry on screen and chemistry helps solidify them as the standouts in the movie.

The only thing that detracted from the movie for me is that this movie did not eclipse Insidious. James Wan, the man behind both films, did a wonderful job bringing this "true" story to the screen but Insidious had some big shoes to fill. Insidious had great creature design, never ending sense of dread, solid acting, and superior story. It was a fresh take on an old story but it was just more effective than The Conjuring in my mind. Insidious is one of my favorite horror movie of the past few years and The Conjuring fell a few places below it on my list. Wan pulled just a few too many things from his previous hit. The visual design of the spirits in The Conjuring were very similar to the spirits in "The Further" from Insidious which was a slight detraction from The Conjuring. Other than those small gripes, The Conjuring was a fantastic movie and should be seen by all horror fans.

This is a fantastic movie that just feels slightly out of place in the summer blockbuster season but it was welcome nonetheless. James Wan has another surefire hit on his hands and it is going to be awesome to see him take on the Fast & Furious franchise in the near future. Go and see this movie if you want to get the shit scared out of you and have a good time at the same time.
Posted by Unknown at 12:29 PM