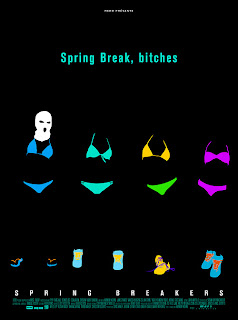 Spring Breakers follows the foursome of Brit, Faith, Cotty, and Candy (Ashley Benson, Selena Gomez, Rachel Korine, and Vanessa Hudgens), as they attempt to escape their boring college lives and experience spring break. The trio of Brit, Cotty, and Candy decide that they are willing to do whatever they need to do, and decide to rob a diner in order to fund their trip. After getting the money for the trip, the four girls head down to Florida for a week of debauchery. They get caught doing some illicit activities and are taken in by Alien (James Franco), who proceeds to show them the dark underbelly of Spring Break.

There is a ton of themes that are flowing through this movie and it was a welcome surprise after seeing the initial trailer, which made this movie look like a vapid piece of trash. Spirituality plays a huge role in this movie, and is focused around the character of Faith. She is a very religious person and she is desperate to experience the world but seems to be looking for these experiences in all the wrong places. She realizes that she is headed down a path of damnation and decides to abandon the group and go back to her old life. Faith sees all of these horrible things going on around her and tries to save her friends but is turned down because they are enamoured by the life that Alien leads. Alien seems to represent "The Devil" throughout the movie, he never forces the girls to do anything but he is always tempting them with money and the promise of a nerverending "Spring Break". Faith bails when she realizes what he is doing but it takes much more disturbing events for the others to snap back to reality.

The appeal of the "Spring Break" experience is undeniable but there is a point where you have to give it up and go back to reality. The characters in the movie were so desperate to hold on to the feeling that they get from being around Alien and his "lifestyle" that they started to become just like him. Candy and Brit are the two that go full bore and fully immerse themselves in the lifestyle that Alien lives. They are entranced by the money and items that he has. They seem to ignore all of the bad shit that could go on at any moment in time while hanging around him. They see one of their friends get shot and seem to ignore it. The end scene is so disturbing when you really take the time and think about what is going on. They go from girls looking to have a good time to being ruthless killers almost instantly.

A quality cast, deep story, and fantastic imagery elevate this movie from being trashy to being potentially one of the best movies of 2013. Selena Gomez is surprisingly solid in this movie, and that caught me completely off guard. I thought she was going to be a joke in this movie but she really does make you feel for her in her struggle to break away from what she sees as a soul crushing existence. I am not a huge fan of James Franco, but he does an excellent job of  making the character of Alien both sympathetic and terrifying through the course of the movie. They are the standouts in the movie for sure and the rest of the cast does a solid job as well.

I would be doing a disservice to the movie if I failed to mention the amazing job that Harmony Korine did. He made an extremely deep movie with interesting characters, in a package that can appeal to both the mainstream crowd as well as the indie crowd. Nothing is overdone in this movie which is saying a lot, because it could have been overly violent or boring. The perfect balance has been struck and many of the scenes reminded me of Drive, with the scenes of violence being devoid of dialogue and the violence serves a purpose and is not pointless. He uses neon in this movie in a ton of scenes and it works beautifully. There is a theory online about how certain colors in the movie are used to symbolize the presence of God, but I don't know if the movie is that deep.

This is the best movie of the first half of 2013 and it bested many of the summer blockbusters in terms of entertainment. Sometimes you need to have a deeper movie experience and this one definitely delivered on that with a very layered viewing experience. This is one that you absolutely must see, I cannot recommend it enough.
Posted by Unknown at 9:25 PM