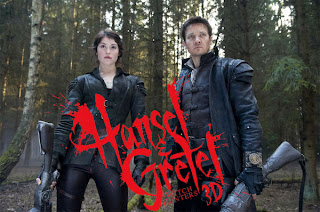 This is one of those movies that were spoiled by other movies that came out in the same year. Abraham Lincoln: Vampire Hunter was an overly serious version of a completely ridiculous concept, there was absolutely no fun to be had while watching that movie. H&G handles the drama and comedy very differently, there is a good mix of both and it never takes itself too seriously. Having Adam McKay and Will Ferrell as producers definitely helped with the comedy aspects of the movie but the action is also extremely well done even with the serious amount of CG that is injected into almost every frame of this film.

The movie starts with the age old tale of Hansel & Gretel (Jeremy Renner and Gemma Arterton), who while in the woods, get lost, and are trapped by an evil witch. They then fight back against the witch and burn her alive in her own oven. But in this version of the story H&G decide to fight back against the various witches of the world and become professional witch hunters. They come across a plot by the witches that will eliminate all of the witches’ assorted weakness and make them all-powerful. As we get further into the plot we find out that everything that the duo thought was fact may not be true after all and they must quickly adapt to the increasingly dangerous mission that they have involved themselves in.

I am really happy that I did not write this movie off, like a lot of people did, because it is extremely entertaining. There is no point at which the movie takes itself too seriously and there is a steady stream of both comedy and light drama that keeps the movie rolling at a steady pace. There is running gag about the side effects of Hansel’s first encounter with a witch that is really creative and funny, and it is little things like this that make the movie so good. The variety of witches in the movie is astounding and at the end of the movie you get to see all of the different types of witches from literature and superstition all in one scene. All of these factors add up to make a badass movie, which turned out to be the best time I have had seeing a movie since Dredd. There was not one point in this movie that I thought a scene could have been taken out to make it smoother and everything just flowed perfectly. More movies need to strive to be this entertaining.

Jeremy Renner and Gemma Arterton have established themselves as action heroes with this movie; each is involved in a couple of awesome fight scenes and makes everything seem a little bit more believable in an otherwise unbelievable situation. Renner gets to show off some of his comedy skills as most of his scenes are either played for some form of physical comedy or they play of the awkwardness of his character. Arterton on the other hand, shoulders most of the movie’s dramatic elements with Gretel being the more serious of the two siblings. Her version of Gretel is badass and with a little more recognition from the American moviegoers, she could have been next in line as the next female action icon.  They combine to make an excellent team and their chemistry is really refreshing, and by what I mean is that there are no awkward “brother-sister” moments in the film.

This is a movie that really deserved to be seen by a much larger audience in the US and it is a shame that the studio messed up the marketing campaign and kept delaying the movie’s release. It also did not help that Abraham Lincoln: Vampire Hunter tanked during its release and that it was also a giant piece of shit for the most part. The silver lining to the situation is that this H&G absolutely crushed it overseas and will be getting a well deserved sequel in the near future. I also kept thinking about that the fact that this would have made a pretty amazing concept for a video game. The whole concept lends itself to Dishonored-type levels about hunting witches in a variety of different ways. It is just an idea that I am throwing out there for everyone to think about.

The bottom line is that you should take the time and see this movie. It is pretty freaking spectacular for a movie that I initially had such low hopes for. It is a good time and there is plenty of gore and violence to satisfy even the most hardened horror fanatic. Hansel & Gretel: Witch Hunters is in the same vein as Army of Darkness. So if you love AoD then you are absolutely going to love H&G.
Posted by Unknown at 8:05 PM