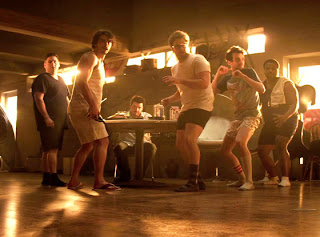 This Is the End is one of those movies that sounds awesome on paper but seems like it would be hard to execute in real life. I am a huge fan of Jay Baruchel and Seth Rogen, so I was all in on this movie as soon as I heard that it was officially being made. If you get a chance check out the awesome short, Jay and Seth vs. The Apocalypse, it is the basis for This is the End. In this movie you have all of the modern-day stoner/slacker movies idols such as Seth Rogen, Jay Baruchel, Jonah Hill, James Franco, Danny McBride, and Craig Robinson playing the central characters in the movie with cameos from just about every big name in the comedy world. It was great to see that what seemed great on paper translated really well to the screen and it looks like Seth Rogen and Evan Goldberg might be the next two big names when it comes to comedy directors.

At the start of This Is the End, Jay Baruchel travels to Los Angeles to rekindle his fading friendship with Seth Rogen. Jay doesn’t like L.A very much so he tries to stay away as much as possible but that has taken a toll on his relationship with Rogen, so he comes to have a bonding experience that consists of getting high, eating fast food, and playing video games. Seth has another plan in mind and he wants Jay to bond with his current group of friends that consists of James Franco, Jonah Hill, and Craig Robinson. Jay and Seth go to a party at Franco’s, and soon after they arrive a massive “earthquake” hits, killing a large number of the people at the party. The five friends hole up in Franco’s mansion and some apocalyptic shenanigans start going down.

This movie is simply hilarious, and every single actor in the main cast gets their time to shine. Rogen and Goldberg did an excellent job of balancing the amount of focus placed on each character but never forgot that this was a story about Jay and Seth. Their story is the heart of the movie and gives the movie some emotional weight. Laughs definitely come at a steady pace in this movie and there are never any “slow” moments to speak of. There are also a ton of references to past movies made by the group and Pineapple Express seemed to be the one that got a ton of focus. Pineapple Express 2 is a movie that I want to see get made and after seeing the “trailer” for it in this movie, I really hope it becomes a reality.

For a movie that is supposed to be focused on comedy, the action in this movie was really well done. The beginning parts of the apocalypse feature large action set pieces and comedy mixed together and it works from start to finish. The “creatures” in the movie are designed in a rather creative way and they are both terrifying/hilarious in certain instances. Danny McBride absolutely owns every single scene that he is in. There are a lot of people that do not like his brand of comedy but I find him to be hilarious, this movie showcases his talents and he gets most of the most memorable moments in the movie. There are also a few notable cameos in the movie that need to been seen to be believed, I don't want to spoil them by describing them.

It was refreshing to see a comedy take on the apocalypse as a backdrop because it is usually the focus of dreary dramas or over the top action movies. Instead we get a hilarious over the top comedy with an awesome cast and hysterical performances. I have seen countless crappy movies about the apocalypse and this was the first comedy that I have seen that focuses on it. Hopefully Seth Rogen and Evan Goldberg continue to fuse different genres with their comedic style, so we can get another movie with the same quality as Pineapple Express or This Is the End.

This is the funniest movie of 2013. Seth Rogen and Evan Goldberg have created a hilarious/horror mash up with one of the best comedic ensembles ever created. Check out this one if the normal summer blockbuster isn't your cup of tea and you want to laugh your ass off.