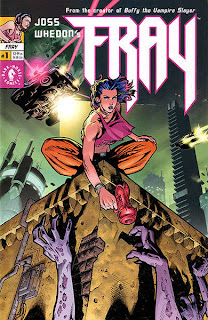 Fray is a spinoff of the very successful Buffy the Vampire franchise. Joss Whedon, the creator of the Buffy series, returns and writes this wildly successful comic series. All of the characters introduced in the comic are original and only the concept of vampires, demons, and the slayer are carried over. There is never a mention of Buffy or Sunnydale. Whedon really got to run wild with the Buffy universe in this series and in doing so created a heroine that is every bit as likeable as Buffy and her crew.

Fray tells the story of Melaka Fray, a young thief in the future, who discovers she is a Vampire Slayer. She is aided by Urkonn, her Watcher, who is trying to train her in the art of being a Slayer. She becomes entangled in a plot to bring back all of the demons to Earth and bring the Vampires back into power. She begins to understand her destiny and finally embraces her role as a Slayer and starts to fight the forces of evil.

This is a great addition to the Buffy cannon and Whedon has created another great story to add to the Buffy universe. The character of Fray continues the trend of Whedon creating very strong female characters. He has created the likes of Buffy and River from Firefly, and Fray has that badass edge to her that allows her to be an engaging main character. The story is a great origin story and it is a shame that there was no follow up because there is so many avenues they could have sent Fray down. She is a thief and a hero at the same time and could have showed her trying to make a living for herself and at the same time trying to save innocents. This would also make for a pretty solid television show but the chances of that happening are almost non-existent.

This is an excellent comic series/graphic novel and if you are a fan of Buffy the Vampire Slayer then you should pick it up. The combination of Whedon's excellent writing and Karl Moline's artwork make this a must read in my opinion. Pick this up and you will be pleasantly surprised with the story and art.
Posted by Unknown at 4:16 PM