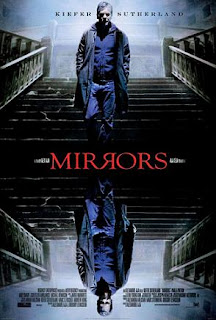 Mirrors is Alexandre Aja's follow-up to The Hills Have Eyes. His first foray into the American Horror genre was a classic in my opinion and he had the unenviable task of trying to outdo himself with yet another remake. This movie stars Kiefer Sutherland, Paula Patton, and Amy Smart which happens to be a pretty solid cast for a Hollywood horror movie. The only thing that held this movie back was that Aja seemed to not want to go over the line in any of the parts of the movie and the brutality was scaled way back when compared to his first few movies. Oddly enough this was also the only movie that he has ever made that did not need to be cut in order to meet the MPAA's approval.

Mirrors tells the story of a disgraced cop, Ben Carson (Sutherland), who is separated from his wife (Patton) due to an unseen event. He lives with his sister, played by Amy Smart, and he seems to be depressed all of the time. We find out that he killed a cop while he was on an undercover assignment and had been dismissed from the force because of this. Ben takes a job as a night watchman of a department store that had burned down several years prior to the events in the film. He starts to have strange experiences with the mirrors in the store at night and he begins to unravel the mystery of the mirrors and of the events that took place in the store.

This is a movie that desperately needed to take more chances in order to be relevant. The idea of demons being in mirrors is a pretty good concept but you have to do something with it. Aja failed to bring a sense of dread to the movie and that is what ultimately killed its success. There should have been a few more kill scenes (there are really only two) and that is just not a high enough body count for a modern day horror movie. I'm just being realistic on that front, I love some slow burning horror movies with low body counts but they generally have better casts and stories than this movie. When you have a director that has made movies such as High Tension and The Hills Have Eyes, there is a certain expectation for the amount of violence and gore that will be in the movie.

Kiefer Sutherland was also a very odd choice for the "hero" in this movie. He was still in the middle of his run on 24 and I felt like I was watching Jack Bauer fight off a demon threat to America, it just fell flat. Another thing that was flat was the chemistry between Sutherland and Patton, which was damn near non-existent for the duration of the movie. If you can get over the fact that you are pretty much watching a horror- inspired version of Jack Bauer then his performance works pretty well. The few death scenes that are in the movie are actually really well done and actually show how fucking terrifying the creatures in the mirrors could actually be, but the there are no kill scenes after the first 45 minutes which seems like a waste.

This is a movie that just fell flat in almost every way. There were a couple of really well done death scenes but other than that there was nothing to really be impressed by in the movie. This was a really weak offering from one of the great young minds in the horror industry. Aja really needs to start developing his own stories and concepts and shy away from remakes. This movie is by no means an essential movie to see but if you catch it on TV there would be worse things to watch.
Posted by Unknown at 9:52 PM