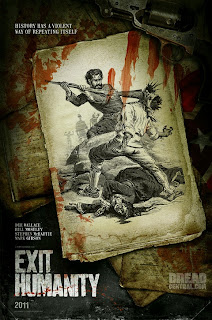 This is a movie that I have seen previews for several times over the past year. Each time I saw it, in my mind I was saying, "looks cool but seems just like every other zombie movie". I will admit that I was completely wrong because this kicks the shit out of any movie/television show involving zombies over the past five years.  The fact that it takes place during the Civil War and the years immediately following the Civil War only adds to the greatness of the film. Every actor in the movie leaves their mark on it and it introduces a few legends of the horror genre to the new generation of horror viewers.

Exit Humanity tells the tale of Edward Young, a confederate soldier, who during the course of being ambushed by a squad of Union soldiers comes face to face with a zombified soldier. He takes the zombie down and then we find out that six years later there has been a zombie outbreak in Tennessee. His wife and child become zombies and he is forced to take action. He comes face to face with the realization that he has nothing left and latches on to a promise he made to his dead son. The promise he made is the only thing that is keeping him going and continuing to fight for his life. Along the way on his journey he meets several unlikely allies and runs afoul of an ex-Union General, who has become consumed with the idea that there is a cure for the zombie outbreak.

This sounds like a pretty lame story doesn't it. Well get ready to have your fucking mind blown. This is a movie that will be considered one of the best movies in the zombie genre t have ever been created. The zombie action isn't really the main part of the movie, it is essential but it doesn't define the movie itself. The thing The Walking Dead comic book does so well is to bring the humanity out in the cast of characters and you see how each and every decision they make affects them on a personal level. That is one thing that Exit Humanity replicates almost perfectly, and Mark Gibson, who plays the main character, carries the movie alone with his performance. His performance is marvelous and he portrays every type of emotion that you could possibly have in his performance. You see how killing zombies effects him over time because he begins to have the realization that they were once people and need to be respected in a way. It is an odd realization to have but it fits in line with the nature of the character. He is a good man stuck in an unbelievably horrible situation that is trying to regain a semblance of his former being.

The movie itself is beautifully shot and some of the shots in the movie rival that of one with 10 times the budget. The film has a bleached look to it but it never detracts from the viewer's experience, it only adds to it. There is no over the top gore in this movie and it happens to be one of the strong points of the movie because it relies on telling a top notch story instead of relying on gruesome deaths to draw in viewers. This is a story about how people deal with a horrible situation and how it can change those people, for better or worse. This is the type of movie that comes along once every few years and it really needs to be seen to be appreciated.

Verdict
A Must See

This is one of the best horror movies that I have seen so far this year. I did not expect to like this movie at all but in the end I loved it. Having genuinely well thought out characters coupled with a great story and gorgeous cinematography will hook me 10 out of 10 times. The cast was spectacular and I foresee great things in the future for the lead, Mark Gibson. I really wish the Walking Dead television show could replicate the heart that this movie had because it could then be considered to be a truly great show. Until that day comes, Exit Humanity is the best entry into the zombie/horror genre for the past few years. Watch it on Netflix or on DVD, just see it as soon as possible. This is perfect for those of you who are horror movie fans that love zombie movies.
Posted by Unknown at 8:27 PM