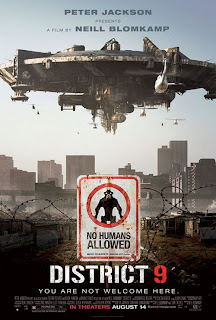 Neil Blomkamp's District 9 was one of those movies that came out of nowhere and exceeded everyone's expectations. It was an August release from a first time director and was a science fiction movie. Most people were probably expecting Sci-Fi channel quality acting performances and story. This turned out to be one of the most well received movies of 2009 and is generally considered to be in the upper echelon of science fiction movies ever produced. There is nothing that is weak in this movie and that is the surprising part, you would figure from a first time director something would be lacking but there was no weak portions to the movie.

District 9 tells the story of Wikus van de Merwe, who is a representative for Multinational United (MNU)in South Africa. He is tasked with moving the Alien population living in Johannesburg to a camp 200km outside of the city. The aliens, also known as Prawns, landed over South Africa in 1982 and were forced to live in a slum called District 9 in the city of Johannesburg. As he is in the process of evicting the aliens, he is sprayed by a black liquid and begins to change. From that point it is a struggle for survival for Wikus and he has to battle the corporation he worked for, a group of bloodthirsty Nigerians, and the aliens he was trying to help.

The characters in the movie are all played by mostly unknown actors and this being their first chance at Hollywood success, they all seized the opportunity and did an amazing job. Sharlto Copley has this movie resting firmly on his shoulders and he does not falter for even a second throughout the course of the entire movie. He is so engrossed in the role that you can almost believe that the documentary film being shot in the movie is real. His character is real in the viewer's eyes and he is a man who for all of his faults is still trying to be a good man and do his job. You almost never see his wife and him together on screen together but you get the sense that they love each other and their relationship is what is really driving Wikus to do everything that he does in the movie. The all CG character Christopher Johnson, a prawn, was also phenomenal. The actor who played the role, Jason Cope, did a fantastic job of getting the audience to connect with the character even though we don't understand what he is saying except for what is written in subtitles. He is one of the only prawns that seems to think for himself and is trying to find a way off of the planet in order to rescue the remnants of his race. His journey coinciding with Wikus' is the most intriguing part of the movie because what starts off as a hugely adversarial relationship turns into one of shared survival and hope.

The special effects in this movie cannot be ignored as they are some of the best in a film to date. The success of CG effects are how seamlessly they can integrated into a movie and not distract you. The aliens in the movie are not pristine angel-like characters, they look like over-sized shrimp, thus the nickname, prawns. Each alien has their own distinct look and movement style which show the incredible amount of detail that was used in creating this film. It also doesn't hurt when you director has the backing of Peter Jackson and WETA. The alien weaponry is fucking brutal and the movie in no way shies away from show the gruesome effects the weapons have. You see people get ripped apart by the electricity guy, blown away by the concussion gun, and filled with holes by the alien version of a machine gun. The amazing thing about all of the effects in the movie is that you think that they were being done by practical means which happens to be quite the accomplishment in today's movie industry.

Neil Blomkamp is quite the talent and it surprises me that he is usually left out of the discussion in Hollywood when discussing the best young directors. This is one of the best debut film in history and his next movie Elysium is shaping up to be in the same class. If you have watched his original short Alive in Joburg and his Halo short movie, then you will have probably realized that all he needed was a bigger budget to create something truly special. I am so pumped for Elysium and I haven't seen any footage yet. Going off the fact that Disctrict 9 was incredible, and the amazing cast that he assembled for Elysium, I am sure that it will be a can't miss movie.

This is one of the best science fiction movies ever created and is one of my favorite movies of all time. Neil Blomkamp is going to be one of Hollywood's premiere directors in the next few years, mark my words. The combination of stellar special effects, story and realistic character made this movie a winner on every front. If you haven't seen this movie then you are doing yourself a disservice, go and see this movie right now. Watch it on Netflix, Amazon, Blu Ray, or pirate the damn thing. Just go and see it.
Posted by Unknown at 3:07 PM