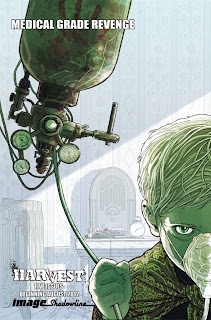 Harvest is easily one of the top 10 independent comics on the market right now, and the amazing thing is that it is only 2 issues in. I rarely see series like this that can make a fundamentally unlikable main character and make him a sympathetic protagonist in a few short pages. The main character Ben Dane is a habitual drug user and alcoholic, who also happens to be a brilliantly talented surgeon. The comic centers around his introduction into an illegal organ harvesting operation for the rich and famous, where CEOs and the rich and elite can get organs they need for a high fee.

At the beginning of the series he is coerced into saving the life of a Yakuza boss' daughter and the boss has complete faith in his ability as a surgeon but Ben constantly doubts himself. He feels that because his medical license was revoked that he is no longer worthy or capable of saving people's lives. That is where his story of redemption begins and his long trek out of the darkness begins as well. He is goaded into working for the organ harvesters because they promise that he will be able to put his life back together and regain what he once lost. Ben is constantly experiencing hallucinations and they mainly steer his moral compass. His life is so fucked that he feels that there is nothing from his old life that is worth fighting for and his hallucinations of a young child that follows him around is trying to right his ship. He has a change of mind after going back to check on a patient that willingly donated a kidney and found that he had been harvested by the group for every usable organ against his will. This leads to a sudden change for Dr. Dane and he realizes that the group needs to be stopped at all costs. This is all just in the first two issues.

This is one of the few comics series that I would actually condone being turned into a television show/ full length movie because the source material would not be hard to translate to live action. Harvest is perfectly suited for a HBO/Showtime-like network and I feel it would be a huge hit if done correctly. But as it stands right now, Harvest happens to be one of the best comics on the market and I'm sure that the rest of the five issue series will follow in the same vein of quality of the first two issues. This is a series that should not be missed and should be read by all comic book fans. if you do not normally read comics this would be a great place to start because it is a self contained mini-series and it is grounded in reality instead of having superheroes running around everywhere.
Posted by Unknown at 10:05 PM