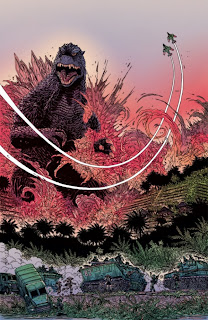 This is the second issue in this new Godzilla series that follows a Japanese soldier through several decades on his quest to destroy Godzilla. Where as the first issue focused on Japan's first encounter with the giant radioactive lizard, this issue focuses on the hunt for Godzilla during the Vietnam War. Godzilla has been tearing through Vietnam and Saigon is in his path and Ota (main character) is determined to stop it. The issue introduces a new unnamed monster that battle Godzilla and new questions about what drive Godzilla to do what it does comes up in the issue as well. Just like the first issue, the artwork is spectacular and the writing is top notch. This is one of the best new series of the year and is definitely in contention for mini-series of the year.

Godzilla is a fascinating character to base a comic series around because Godzilla is not an interesting character by itself. You really need to craft an interesting cast of characters that are either fighting alongside or against Godzilla. In the Half Century War mini-series the characters introduced are just fantastic and you have to wonder why they were never really able to do the same for any of the movies. This is a series that can be used as the foundation for the reboot of the Godzilla film series that is currently in the works. Make it have a gritty feel and you don't need to set in modern times.

The idea of tracking a single human character that is fighting against Godzilla for decades is just pure genius. You gt to see the over the top destruction that Godzilla brings and you bring in the human element and see how the destruction and the hunt effect the people on the ground. it is unfortunate that Godzilla became a joke in the movies with it fighting threats from outer space and have a child that looks like the retarded version of Baby from the television show Dinosaurs. Hopefully this series goes a long way to redeem this once awesome franchise and brings it back from the ashes.
Posted by Unknown at 10:04 PM