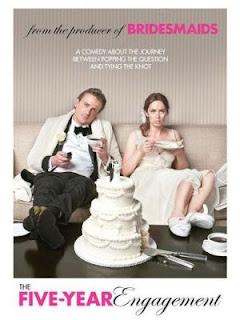 I am a sucker for romantic comedies, and I am not afraid to admit it. There have been many that I have seen over the years and this was definitely one of my favorites alongside Forgetting Sarah Marshall and (500) Days of Summer. Jason Segel is easily my favorite actor and my perfect woman is Emily Blunt, so I was eagerly anticipating watching this movie. Unfortunately, I missed it while it was in theaters due to late nights at work but I finally got to watch it on Blu-Ray today.

The Five-Year Engagement tells the story of Tom (Jason Segel) and Violet (Emily Blunt), who are madly in love with each other and they are about to get married. They live in San Francisco, where Tom is a chef at a high end restaurant and Violet is studying to get her doctorate in psychology. She gets the opportunity to study at the University of Michigan and they decide to put the wedding on hold because they are both moving to Michigan. Tom is miserable there and Violet feels guilty for making him move from his job and this is where the cracks start to begin.

The truly great thing about the movie is that it really makes the relationship between Tom and Violet seem like a real life relationship. You get the chance to see how the characters evolve over the course of five years and how the prolonged engagement starts to wear on Tom, Violet, and their families. It starts out as a comedy and then starts to develop the dramatic elements when they move away and then blends the comedic/dramatic aspects in the third act to really make the film special. It also didn't hurt that the movie is hilarious and it even got me to shed the occasional tear during the more dramatic sequences. If a romantic comedy can get me to shed a few tears and laugh out loud, all during an hour-and-a-half span then it is a runaway success in my mind.

The chemistry between Blunt and Segel is fucking phenomenal and it really has to be because it is the driving factor of the entire movie. They just seem so natural together in every scene and they really sell the fact that they are madly in love with each other. Segel handles the switches between comedy and drama like a true expert and I like him more and more with each new movie he comes out with. He was great in The Muppets and he was even better in this.  Blunt is the picture of perfection in the movie switching between being sexy, funny, smart, and dramatic. She has the standout performance in the movie proving that she can handle comedy to compliment her already sharp drama skills.

Chris Pratt and Alison Brie are the main supporting character's playing Tom's best friend and Violet's sister. Pratt essentially plays a more crass version of Andy Dwyer from Parks and Recreation and Brie plays the needy younger sister of Violet's to perfection. it is wonderful to see these two getting some big screen comedic exposure because their shows are criminally under watched on the train wreck that is known as NBC. I can't wait to see what these two do in the future and I have the feeling they both have huge careers ahead of them in both TV and movies.

This is a great romantic comedy and is easily the best romantic comedy of the year to this point. Segel and Blunt were matched perfectly for this movie and they crushed it in every scene that they were in together. The last five minutes of the movie definitely made me shed a tear because I became so attached to the relationships that formed in the movie. This is definitely worth your time and is certainly worth a purchase as well.
Posted by Unknown at 9:17 PM