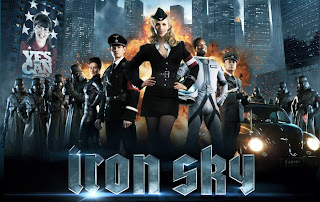 Nazis have been the subject of many B-Movies, ranging from horror to action. They have been werewolves, vampires, and zombies but they have rarely been astronauts. For such a serious group of people they get ripped on constantly, generally with hilarious results. The idea of the Nazis residing on the dark side of the moon after losing World War II is just ridiculous, which always the first sign of an awesome B-movie. The movie was co-financed by Finnish, German, and Australian backers so it is kind of a weird mash up of cultures. It takes the charm of those crappy Sci-Fi channel movies and brings along the special effects of a blockbuster.

The movie deals with an American space mission to the moon that is being used by the President of the United States as a re-election platform. She sends a black male model, James Washington (Christopher Kirby), and uses the slogan "Black to the Moon" as her campaign slogan, which is not the greatest of ideas. When they land on the moon, they discover a massive Nazi moon base and James is captured. He meets Renate Richter (Julia Dietze), a Nazi school teacher, who is very idealistic and believes that the Nazis' intentions are pure and peaceful. Then there is her warmongering fiance, Klaus, who wants to be the next Fuhrer of the Nazi Empire. Then the Nazis' plan unfold of trying to take over the world over again using their "space age" technology.

This is a movie that takes everything to 11 and it is just awesome. The acting may not be the best, the story might be predictable, but it doesn't make the movie any less enjoyable. When you are watching a movie about Space Nazis, you really can't expect to get Oscar quality script and acting. The special effects in the movie are actually really good for a B-movie and to be honest they are probably better than 75% of the big budget Hollywood movies out there. The two main characters, James Washington and Renate Richter, are extremely likeable and especially Richter. She really believes that the Nazis' intentions are good and that they are trying to help heal the world. Her concept of the Nazi party is then shattered by watching Charlie Chaplin's The Great Dictator, and from that point on she only wants to destroy the Nazis' plans. There is an outer space battle that has the visual flair of the best scenes from Battlestar Galactica and they are great scenes. The acting overall is not that great and there are a few plot points that are dropped without any follow through, but those are only minor complaints when stacked up against the manic craziness that is the rest of the movie.

Iron Sky is a B-movie through and through. You have space Nazis, a swastika shaped Moon base, and the USS George W. Bush battlecruiser which can only lead to major success. This is a really great B-movie, it is funny, takes chances, and goes over the top for everything which always leads to a quality B-grade movie. This is a movie that encompasses the definition of fun to watch and you should really try and see it as soon as possible. Check it out on DVD, Blu-Ray, or On Demand. SEE. IT. NOW.