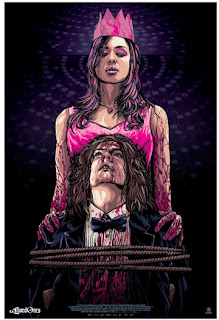 The Loved Ones follows Brent, a high school student recovering from a car accident that claimed the life of his father. He is approached by Lola to go to the prom but he is going with his girlfriend already and turns Lola down. Turns out that Lola is a crazed psychopath who has her "daddy" kidnap Brent. Lola and her "daddy" create a fake prom in their secluded house and Lola is the Prom Queen and Brent is the Prom King. They torture him in hopes that he will change his mind and fall in  love with Lola. From that point on it is a mad dash for Brent to try and escape, his mother to find him, and for Lola to fulfill her psychotic fantasies.

The thing thing that really separates The Loved Ones from the shitty movies in the genre is the fact that the characters are interesting and the villain is absolutely batshit insane. The main character, Brent, is a genuinely good guy dealing with the death of his dad that he feels responsible. He turns to cutting and drug use to try and dull the pain, and when he rebukes Lola there is no intention of hurting her. She has other plans though. Generally in a movie like this, the main character would be a jock and act like a jerk then would learn a lesson from his experiences. Brent just got targeted by a psycho and had to suffer the consequences.

The villain, Lola, is fucking brilliant in this movie and is a stand out in the horror genre. She is the embodiment of hatred and pure evil, and she will stop at nothing to get exactly what she wants. She lobotomizes people and has an incestual relationship with her dad, that pretty much sounds like pure evil to me. She seems like such a mousy outsider when you first meet her, then you realize that she is a tornado of crazy and will tear apart anyone in her path. She is damaged in just about every possible way a human could possibly be damaged and that is what makes her so engaging. You don't know much about her past and that is what makes her a compelling villain, you want to know what fucked her up.