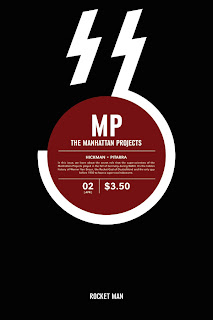 For this issue the focus shifts from Joseph Oppenheimer to Richard Feynman and Wernher Von Braun. We are essentially following the brightest minds on either side of the conflict in World War II. Richard Feynman is one of the brightest minds that the Americans have to offer and he is also the most inexperienced of the group so he would naturally be chosen to parachute into German territory to speak with Von Braun. On the other side, Von Braun is approached by Hitler and his commitment to the Nazi cause is questioned. He kills all of his fellow scientists when the Americans are close to capturing their work and offers himself to the American with the stipulation that he can continue his work. This is where the actual Manhattan Projects begin to take form for me.

Feynman and Von Braun are two interesting characters to follow side by side. Richard Feynman seems like he is young and eager to learn from all of these brilliant minds and is portrayed as the every man in the group. In actuality he is smarter than a lot of the individuals in the group but lacks the experience to fully take advantage of his gifts. Von Braun is a super genius as well and he is realizing his life's work with the Nazi army, but has no qualms about doing what needs to be done in order for him to see his life's work come to life. Von Braun represents where Feynman's life could go if he makes certain decisions. That is the way that I see it any way, and I don't doubt the fact that I may be completely wrong in my assumptions. I will say that Wernher Von Braun is one badass human being and is oddly my favorite character in the series (up to issue #7 at least). His conviction is what really sells his character, because he really is mainly concerned with the science of his projects and could give a shit about the cause.

The issue also benefits from the stellar artwork of Nicholas Pitarra which is just as solid as the first issue. Every character has a semi-grizzled feel to them with the exception of Richard Feynman, because he is the young one of the group. The group suicide scene is pretty awesome as well, with everyone at the table contorted and dying while Von Braun just sits at the head of the table with a smirk on his face as the US soldiers storm the room. it is just a beautifully twisted scene and sets the tone for the issue. This is a comic that can be appreciated as much for the art in it as the story. Just a perfect combination of the story and art.

This is a series that I cannot recommend enough, and is a great comic series to begin with if you are just starting to get into comic. It shows how you can take real life people and mold their characters and their history into something epic and fantastical. If I were you I would go out and pick up the first trade paperback of the series so you can experience the craziness and greatness of this series firsthand. You're an asshole if you don't at least try the series out, just sayin'.