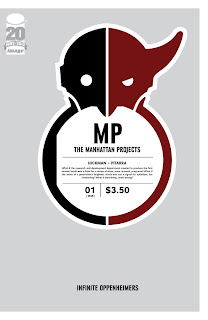 I am just going to get this out of the way and say that this is the best monthly comic series being produced by any major comic company at this current point in time. It is just crazy enough to make you feel like anything can happen and it features one of the most interesting casts ever used in comics. The idea of using the Manhattan project as a backdrop for the series is ingenious because there are so many interesting characters/people to use and since it was a science based project it lends itself to the idea that there were more projects being worked on behind the scenes. Jonathan Hickman and Nicholas Pitarra create an engrossing book that is getting better with each and every issue.

This issue focuses on Joseph Oppenheimer, who is being interviewed for a position in the new Manhattan Projects sponsored by the US government during World War II. It focuses on the duality between Joseph and his brother Robert, who are each polar opposites of each other. One is interested in science and helping the world while the other is a brilliant serial killer. They are both brilliant in their own ways and their paths just diverged to such a large degree that they have nothing in common. But at one point they have a reunion and it doesn't exactly go "great" for one of the brothers. Looks like you will have to read the issue to find out what happens.

The art is fantastic in this book and really gives the book its "life". There are so many crazy and over the top scenes to draw and each is handled perfectly. Pitarra creates a scene where the Japanese forces send death robots into the lobby of the Manhattan Projects and it becomes a glorious bloodbath. American soldiers and mechanized samurai battle each other and Oppenheimer comes in to save the day. The characters also convey a huge amount of emotion in each panel which is always the trickiest thing for artists to do correctly and Pitarra nails it in every scene. Seeing Albert Einstein locked in a rook just smirking because he knows someone is looking at him is great and seeing how Oppenheimer reacts to a machine trying to touch him is just priceless.

This is the most fun I have had while reading a comic in a very long time. The great part of the series is that I have absolutely no idea where the story is going to go from issue to issue. If it can keep me guessing, I will be sticking with this book until the end. Hickman and Pitarra have put together one of the craziest and most interesting series currently being produced. It is a true accomplishment when you can take a cast of almost completely unlikeable characters and make them awesome and compelling. This is a must buy for any Sci-Fi fan or alternate history fan. Put this on your monthly pull list at your local comic book store and you will not be disappointed.

For all of you Workaholics fans out there, this series is very Tight Butthole.
Posted by Unknown at 9:57 PM