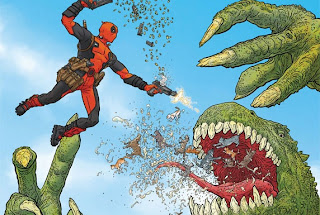 This is the second title to debut under the Marvel NOW! banner. The team of writers Brian Posehn, Gerry Duggan, and artist Tony Moore do a fantastic job of creating a Deadpool book that combines over the top action, humor, gore, and dead presidents all under one roof. The combo of the oddball humor of Posehn and the outstanding artwork by Tony Moore makes this a pull list selection for avid comic readers.

I have never been a huge fan of Deadpool and I always found him to be more of a distraction in a book rather than being an essential piece of the story. His addition to the X-Force book started to turn my opinion of him and then this book made me a full fledged fan of the character. He is written impeccably by Posehn and is equal parts psychotic and heroic. The team up with Thor in the book is just priceless, because Thor is so incredibly embarrassed to be mentioned in the same breath as Deadpool. It is just a fantastic scene that shows how crazy the series is going to be and that happens before FDR shows up as a ghost and has a full out battle with Deadpool and SHIELD.

The art of Tony Moore is just flat out incredible and it is a major reason why this book works. With a lesser artist this book would be mediocre book but Moore just takes it to another level completely. He draws the action scenes with a sense of brutality that was probably carried over from his work on The Walking Dead and Fear Agent. His action scenes are over the top and when he needs to he is able to convey the humor that is laced throughout the book. His depiction of FDR being cut down by Deadpool with a katana is fucking hysterical and is the standout action scene of the book.

This is a book that needs to be read by comic fans far and wide. It is also accessible for new readers because you don't need to have a full understanding of the character to jump into this book. The art alone is worth the price of admission and the writing is just icing on the cake. If this is indicative of what the Marvel NOW movement will bring to the table then we are in for quite a treat over the next few months as the new titles roll out. This series also has some of the best covers that you will ever see.
Posted by Unknown at 9:31 PM