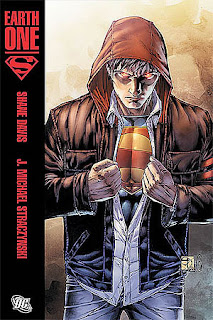 This is the book that has officially changed my stance on Superman. This is a hero that I have hated for years but this book changed my mind in a matter of minutes and I now actually understand Superman as a character even though most writers have absolutely no idea how to handle him. J. Michael Straczynski does a great job of crafting an updated origin story for Superman and manages to make the character very sympathetic. The artwork of Shane Davis is also as solid as ever and shows why he is one of the most popular artists in the comic industry.

This is a retelling of the origin story of Superman, and shows why Clark Kent decided to become Superman. We follow Clark as he comes to Metropolis to find a job that will help him support his mother for the rest of his life. He is not concerned about his own happiness and simply want to make his mother's life comfortable. He goes to an open tryout for the Metropolis pro-Football team and is offered a blank check to play with them, he makes scientific breakthroughs at a lab, and applies to the local newspaper, The Daily Planet. You realize that he is really alone in his situation because he can never truly show off his abilities in his Clark Kent persona because he will be studied and ridiculed. When the city is threatened by an alien threat, Clark comes to the rescue and he discovers himself and saves the day.

This is a great take on the character of Superman, and it is really in the writing of JMS. He is written as a very conflicted character and is trying to discover his place in the world while trying to do right by his mother. He realizes that he will never really be happy because he can never really be himself in front of people. He comes to eventually realize that Superman is who he really is and that Clark Kent is the mask that he has to put on in front of people. He gets to help the people of the world with his powerful gifts and also be a functioning member of society as Clark Kent. I feel that this is sometimes lost on some writers for DC and they tend to just write Superman in all of these over the top action sequences.

The art in this book is also amazing, and proves why Shane Davis is one of the most sought after artists  in the comic industry. Every panel is great and everything from emotional panels to action panels are handled with grace. Davis really needs to be on a monthly book at this point. His work is head over heels better than a high percentage of artists in the industry at this point. His art is perfectly suited for Superman and any of the larger title books in the DC universe.

This is a must read for Superman fans and comic fans in general. The great story combined with the top notch artwork makes this book an instant winner in my eyes. This is a creative team that deserves a shot at the main Superman title for DC for years to come. Go out an grab this as soon as possible and if you have anyone who is a Superman fan in your family then this would make an awesome Christmas gift. THIS IS A MUST BUY.
Posted by Unknown at 9:13 PM