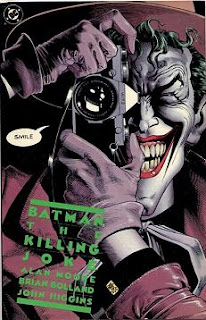 The Killing Joke is one of the defining tales of the Joker. It is one of the few stories that the clown takes center stage and Batman plays second fiddle. Alan Moore crafts a magnificent graphic novel and continues his run of amazing work which includes Watchmen, The League of Extraordinary Gentlemen, and Swamp Thing. He really has an incredible way of crafting extremely personal tales and making even the most monstrous of characters seem sympathetic.

The Joker is an incredibly interesting character and throughout the course of the novel he slowly unveils his "origin" story. The reader has no idea whether or not he/she is being told the truth by the Joker, so there is always a sense of disbelief when reading what the Joker has to say. Commissioner Gordon also plays a huge part in the novel and is really put through the wringer. He witnesses his daughter being shot and then is tortured by the Joker's thugs and he never breaks. This shows that not everyone is breakable like the Joker believes. Batman is not as important to the story and is really a secondary character in the book. He is there to set up the narrative for the Joker and to confirm how good of a man Gordon is. The way Alan Moore writes these characters is just masterful and he makes the characters seem believable. The Joker at points seems sympathetic at times and makes you believe that he is just this horribly broken individual. The only problem is that the Joker may be lying throughout the course of the novel.

This is a fantastic graphic novel and it needs to be read by any fan of Batman. The Killing Joke is also an essential graphic novel for any fan of comics in general. I can't believe that I went so long without reading it and I am glad that I finally did. I really wasn't a fan of the Joker before reading this but I now think he is easily one of the more terrifying villains in comics. Give this a read and you will certainly be blown away by the quality.
Posted by Unknown at 12:06 AM