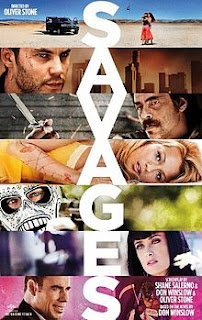 Savages looked like it was going to be one of the most exciting movies of the summer when the original trailer hit the internet several months back. The fact that the movie was being made by Oliver Stone piqued my interest and I was sold on the movie. I haven’t really been a fan of Stone’s last 18 years of work but I am a fan of his earlier movies, so I was hoping that he would return to the quality of movies such as Wall Street and Platoon. It was also a good sign that he assembled a pretty solid cast for Savages which included John Travolta, Taylor Kitsch, Aaron Johnson, Selma Hayek, and Benicio Del Toro.

Savages tells the story of Ben (Aaron Johnson) and Chon (Taylor Kitsch) who run a very successful drug operation in Southern California. They share a lover in O (Blake Lively), who also serves as the movie’s narrator. They are propositioned by a Mexican drug cartel to work in a joint venture that would grow their business and allow the cartel access to the duo’s superior product. Ben and Chon also work in conjunction with a corrupt DEA agent, played by Travolta, who may also be in business with the Mexican cartel. When they spurn the cartel, O is taken hostage and the duo will stop at nothing to get their girlfriend back.

The performances in the movie are actually really solid with the exception of Blake Lively who really serves as eye candy for the majority of the film. Travolta gives a great performance as a corrupt DEA agent and provides most of the film’s comic relief. He is also one of the only characters in the movie who uses common sense which is always a plus when trying to keep yourself alive. Aaron Johnson also gives an excellent performance as Ben, who is the brains in the drug operation. His character is the moral center of the film and he has to really decide several times if he is willing to go over the line to do what needs to be done to get O back. This is the first movie I have seen him in since Kick-Ass and he was really solid in this movie. It was great to see Selma Hayek and Benecio Del Toro having so much fun with their characters. They play them in such an over the top way that it is hard to hate their characters even though they are terrible human beings. Oliver Stone made this movie in a straightforward manner and that was a great relief because there is usually a political message that he is trying to cram down the viewer’s throat the entire time. I also loved the twisted romance that the movie is based around because it takes the movie in places that you wouldn’t normally expect for a movie that is essentially a love story with a few action scenes thrown in.

The narration in the movie is completely unnecessary and could have been discarded and the movie would have had a much smoother pace. The acting of Kitsch and Lively were not up to the quality of the rest of the cast and was passable for the most part. At least I didn’t have to hear Kitsch do a Batman impression for two hours like he did in Battleship. Hollywood needs to learn that this guy cannot headline a movie by himself and you need to pair him with another quality actor to balance out his lack of acting ability. It was a good thing that Stone cast Aaron Johnson to play alongside Kitsch. Lively really only contributes to the movie by looking hot as hell and by having one of the most awkward sex scenes that I have ever seen to kick off the start of the movie. It is hilarious for so many reasons and one of them is the use of the word “wargasm”. When I heard that in the theater I laughed out loud, but it was a little awkward that I was the only one who did so in the theater. The ending was a little bit of a copout but it didn’t destroy the movie for me and I thought it was a great ride.

Savages is a good thrill ride and gives me hope that Oliver Stone still has something left in the tank after producing crap for the last twenty years. Overall this was a very solid thriller and deserves your time and attention. I leave you with one word from this movie that you will probably remember “wargasm”. One of the worst terms you will hear all summer.