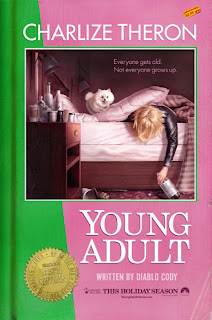 Young Adult is about having to grow up no matter how old you are. This also happens to be Jason Reitman's deepest and possibly best movie. Charlize Theron was straight up robbed this year during award season. Anyone who watches this movie and can tell me there is no way that she deserved more recognition for this role, the I will give you a free hug. Patton Oswalt was disrespected to a lesser degree because he is not a well known actor but that doesn't make his performance any less powerful. Reitman's movies have all been pretty spectacular with the exception of Juno, which was a disaster in my opinion. This movie has really well developed characters and a fantastic lead character that is by no means likable in any way but her journey is a fucking hilarious one.

Oswalt and Theron absolutely kill it in this movie. They control every scene that they are in and when they are on the screen at the same time it is a sight to behold. Theron plays the villain with elegant grace and she makes the character her own. Oswalt plays the lovable loser in the movie but his character is a lot more damaged and witty than the stereotypical lovable loser in movies. His character is the perfect counter to Theron's and they play that up to effect in almost every scene that they are in. It was also refreshing to see Oswalt get a chance to bring his humor to the big screen, and I would really like to see him get bigger roles in movies just like the one he had in this movie. Having Theron play a mostly unsympathetic was also an inspired choice because she usually plays the heroine in most of the movies that she is in except for a few. She embodies the true crazy of her character, Mavis, and you never really feel like you are watching Charlize Theron but instead feel like you are watching this woman who is going through a prolonged mental meltdown. And the surprising thing is that I enjoyed every moment of that meltdown.

This was one of the best movies of 2011 and slid past Tucker and Dale vs. Evil to enter my top 5 movies of last year. I have personally been a fan of Patton Oswalt for years and this movie made me love him even more. Theron was truly amazing and I can't wait to see her in Prometheus this summer. I wish there were more comedies like this on the market because they care about the characters just as much as the laughs. This is a 9/10 for me and you should really take the time to sit back and enjoy this movie.
Posted by Unknown at 1:21 PM