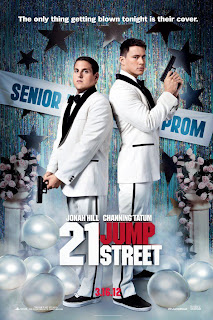 21 Jump Street originally debuted in 1987 and starred Johnny Depp as a young undercover police officer. The tone of the original show was very serious and mostly a police procedural. It focused mostly on police cases centered in colleges, high schools, and most of the cases centered around drug trafficking. The series also has the honor of launching Johnny Depp to stardom and he has become one of the most bankable stars in Hollywood. Oddly enough he was not happy with how he was being perceived in Hollywood while on the show and asked to be released from his contract. After he was let out of his contract, the show fell apart and was soon cancelled after that.

In the 2012 version, the tone and attitude of the characters has been completely altered and retains just the overall idea of the TV show and little else. Morton Schmidt (Jonah Hill) and Greg Jenko (Channing Tatum) were polar opposites in high school. Jenko was a popular jock and Schmidt was the awkward loser/nerd. Seven years after high school they are reunited at the local police academy and quickly realize that they can help each other with their unique talents. They quickly become best friends/partners and then they have their first bust which goes completely wrong when they fail to read a criminal their Miranda rights. They are soon placed into a revived undercover police program based in a church on 21 Jump Street. They are placed in a local high school to bust a local drug ring to stop the spread of a new designer drug.

What is a NARC, bro?

The reemergence of the R-Rated comedy. This is the latest in a great 5 year span for adult comedies and this one definitely took the "buddy Cop" movie to a new level. Hill and Tatum make a great team and you get the sense that their characters are really close friends. The humor was great for the type of movie that it was and it helped the Hill also wrote the movie because he is one of the most talented young actors in Hollywood. More movies need to realize that if you are going to have an R-rating then you might as well just go balls to the wall with it. This movie did it perfectly and it had the entire theater laughing from start to finish. This is one of the only movies that has taken a realistic approach in terms of how action scenes play out. Things that would normally explode in movies but not in real life act realistically in this movie and it was a very refreshing change. This is a perfect blend of comedy and action and I really can't remember the last time I laughed this much during a movie, possibly during Due Date or the original Hangover. Channing Tatum was actually perfect for the role he played and seemed to have a natural comedic flare and we already knew he would be able to handle the action component. The cast is generally very good with Hill, Tatum, and Brie Larson anchoring the cast. Larson is a very good comedic actress and I can't wait to see what other roles she will have in the future, because she was very good on the latest season of The League(watch it).

Brothers from another mother.

The only reason this movie was not a perfect movie was because of Rob Riggle. He has had a single funny line in exactly one movie, Step Brothers. Other than that he is pretty much worthless. He instantly brings down any movie in which he appears in. Sounds like he is one of my favorites, doesn't it? This movie movie is easily a 9.5/10 and crushed every other comedy that I have seen in a very long time.