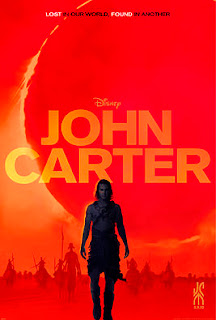 This is a movie that I have been looking forward to since I heard that it was being produced. John Carter is a story that predated Star Wars, Avatar, and pretty much every other modern sci-fi movie/novel. This is the story that began everything that we love today and you can see how the story would have influenced movies such as Avatar (which borrowed heavily from John Carter of Mars). The effects were excellent but the over reliance on CG always counts against a live action movie in my eyes. I really liked the leads in the movie, Taylor Kitsch and Lynn Collins. It was also great to see Bryan Cranston get some big screen time even if it was for a very small part. Andrew Stanton, who directed Wall-E and Finding Nemo, also shows a lot of promise as a live action director. My only advice would be to do something on a smaller scale for his next feature.
The action in the movie was definitely one of the strong points of the movie. The violence is brutal but toned down enough where people of all ages can enjoy the movie. It also helps that most of the characters dying on screen are CG. The story was also a plus for me because I really got wrapped up in John Carter's journey and him discovering his lost confidence/beliefs. The acting is good for the most part but flirts with B-movie status a few times. Disney did the story justice and I hope they have enough confidence in the series to make a sequel because with the initial introduction out of the way they can bring out more interesting stories.
I am a huge fan of Flash Gordon and I can see how it ripped off the story of John Carter from Mars in almost every way. John Carter is the movie that Flash Gordon should have been if done right. The problem that all of these movies had in replicating the John Carter story is that they were unable to create and form characters that the viewer or reader cared about. No one really cared about any of the characters in Avatar or Flash Gordon. But in the old John Carter comics ad even in the movie, the viewer gets to know the characters and actually cares what happens to them. This is something all movies and stories should strive to achieve.
This is the type pf movie that can really bring the lighter side of sci-fi back to theaters. This is one of the only sci-fi movies in the last 10 years that I have seen where actual families were in the theater. That is a great thing to see because this movie appeals to people of all ages and does not dumb down the original source material. In my opinion Disney has a winning franchise with this movies and lets see if they take advantage of that fact. This gets an 8/10, great action and story but it goes get a little hokey in parts.
Posted by Unknown at 5:11 PM