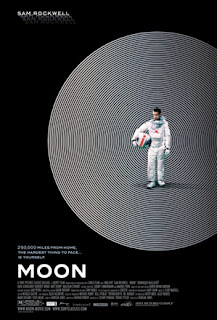 Moon is the first feature film from writer/director Duncan Jones, who also happens to be the son of David Bowie. This is one hell of a debut and I was pumped to see this movie when it was released a few years ago.     It was too bad that it was released within a few weeks of both Avatar and District 9, so it ended up being ridiculously overlooked during award season. Most science fiction movies strive to be as good as this movie and it would be an accomplishment is they were able to have 1/10th of the heart and soul that this movie has.

Moon tells the story of Sam (Sam Rockwell), a worker for Lunar Industries on the Moon based mining operation. He runs a mostly automated operation and the only other "person" in the base is the Artificial Intelligence known as GERTY (Kevin Spacey). Sam is coming to the end of his three year rotation and he is eagerly counting down the days until he is reunited with his wife and daughter. On a routine assignment to collect ore from a harvester he gets distracted, crashes, and is knocked unconscious. He awakens to see that he was brought back to the base by another version of himself. From there on out both versions must find out their origins and find a way home.

This movie would have been nothing if there was someone else in the lead role besides Sam Rockwell. He brings an every-man sensibility to this role that is just outstanding. There is no point in the movie that I felt like he was acting, every reaction feels natural and nothing is forced. He plays both versions of Sam completely different and each has their own strengths and weaknesses, which come i handy throughout the course of the movie. Rockwell has become one of Hollywood's great characters actors and this is the movie that really hammered home that point for me. His performance in this movie was as good as any other performance in the last 20 years and is on the short list of my favorite performances of all time.

The story itself is also incredibly original and Duncan ones did a wonderful job with the entire script. The dialogue is sharp, characters are great, and the story is wonderful. This was a home run on every level. Moon is a blue collar movie, and by that I mean that it works to do all of the little things correctly. The idea of mining the Moon for resources is plausible and is being researched currently by NASA and the way Sam reacts to his situation is written perfectly. Jones and the visual effects team took the time to make sure that all of the effects were realistic and plausible. They were even able to give personality to the AI played by Kevin Spacey, who acts as Sam's guardian, with simple things such as different smiley face emoticons on his screen. This was a movie for the ages in my mind and it will be extremely tough for Jones to replicate this type of success again.

Moon is one of those criminally overlooked movies that with a bigger studio push could have been on the same level of District 9 or Avatar in the mainstream viewer's eyes. Sam Rockwell gives a performance as good as anyone has in the last 20 years and even that was overlooked, which is a shame. You can see this on Netflix, DVD, Blu Ray, or Redbox, and the main thing is that you go and see this as soon as possible.
Posted by Unknown at 11:17 AM