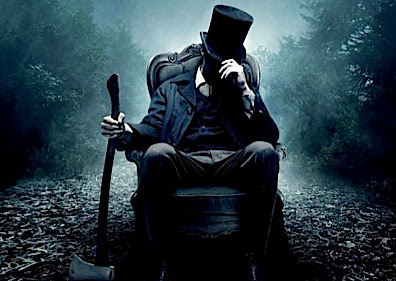 I will start this review by letting everyone know that I loved the Abraham Lincoln: Vampire Hunter novel. It was a great alternate history novel that was both serious and silly all at the same time, the perfect blend. Seth Grahame-Smith did a wonderful job with the novel and he wrote the screenplay for the film as well which was a great idea. The main thing that got me pumped for this film was the involvement of Timur Bekmambetov, creator of the movies Night Watch and Day Watch.

Abraham Lincoln: Vampire Hunter tells the alternate history of one of our nation's greatest Presidents, Abraham Lincoln (Benjamin Walker)  and his "life" as a vampire hunter. He feels responsible for his parents' deaths and he vows to avenge their deaths by killing all of the vampires. He is trained by Henry Sturges (Dominic Cooper), in the art of tracking and killing vampires. He also meets his future wife, Mary Todd, and has to balance his life as a vampire hunter and a rising star in the political world.

Benjamin Walker does a great job in the role of Abraham Lincoln, not Daniel Day Lewis quality, but he is still very good. He is extremely charismatic in every scene that he is in and it is great to see him become both this incredible leader as well as a skilled vampire hunter. The is  fine line that he had to walk in the role because it could have become very silly but thankfully he plays the role with the right attitude and easily carries the movie on his shoulders. Dominic Cooper is also solid in the movie as the mysterious Henry Sturges. Cooper is great in almost every role that he is in and is slowly building up to being in leading roles in movies. Mary Elizabeth Winstead is as beautiful as ever and plays the role of the supportive wife of Abraham Lincoln.  She is just so sexy.

The story heavily altered from that of the novel and I can understand why but it still took away from my enjoyment of the film. If I had never read the book I would have liked this movie a whole lot more, but this was still a solid movie. The altering of certain aspects was a good choice to fit the movie, I just can't describe them because I don't want to spoil the movie for anyone. All I can say is that they should have kept the ending to the book, it was just so much better than the movie version. The overuse of CG in the movie was a little disappointing but I can't really count it against the movie because almost every movie these days overuses CG.

The main negative of the movie for me was the fact that Timur Bekmambetov did not take any chances with his direction. He used a lot of innovative techniques in his earlier films such as Night Watch and Day Watch. Everything from the use of subtitles to the innovative effects sequences are what made those movies great and different from anything that had been produced by Hollywood. None of those things that made his earlier movies great appear in this movie, he uses the most stock of his abilities and shoves them into the movie.  Ir is sad that a director with this much promise has fallen into the Hollywood trap instead of differentiating himself from the pack. He still has a lot of time to build on his successes and get back to his old form. I am in no way saying this is a bad movie it just pales in comparison to his earlier films. If you have not seen Night Watch, you need to go see that movie right now, just make sure that you watch it with the original subtitles. It is unlike anything you have ever seen before.

This a movie that failed to live up to its lofty expectations but it is still a solid and entertaining summer blockbuster. It has a handful of great performances and some really bad CG. But with movies like this, you take the good with the bad. Check this out on Blu-Ray or On Demand.
Posted by Unknown at 11:09 PM