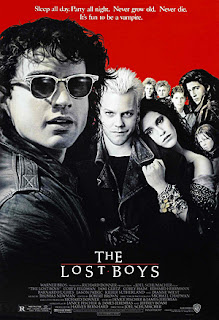 After seeing this movie for the tenth time, I felt like it was the right time to sit down and right an actual review for it. The Lost Boys is a classic 80's movie and is one of the greatest vampire/horror movies of all time. A cast that includes Corey Feldman, Corey Haim, Jason Partric, Dianne West, Kiefer Sutherland, and Jami Gertz will more that likely lead to good things. I saw this years after it originally came out because it came out the year I was born and I love it just as much as the first time I saw it.

The Lost Boys tells the story of brothers, Michael (Jason Patric) and Sam (Corey Haim), who have recently moved to a coastal California town with their divorced mother (Dianne West). Sam stumbles upon a comic book store run by the Frog Brothers (Corey Feldman and Jamison Newlander), who warn him about vampires in their small town. Michael is then taken in by a new group of "friends" who have a lot of dangerous secrets that threaten to destroy the lives of Michael and his family.

This is my favorite vampire movie of all time, it is not technically the "best" one that I have ever seen but it is the most memorable and exciting one that I have ever seen. The mix of humor and horror is just perfectly done and the two pairs of brothers in the movie are fantastic, each with their own creative dynamic. Jason Patric and Corey Haim anchor the movie and their performances are great and are probably the best of their respective careers. Kiefer Sutherland plays a great role as the main antagonist of the movie and really sells the fact that he is a manipulative bloodthirsty creature of the night. The action scenes and the gore in the movie are also top notch and the movie is devoid of any CG which is a plus considering how crude it was back in the 80's.

The story may seem simple on the surface but it does a lot of things that vampire movies don't do in general. They use a lot of the old myths about vampires to set the rules of what affects the vampires and how they act where as movies these days completely disregard vampire myths in almost every way possible (I'm talking about you, Twilight). The use of the hellhound, garlic, wooden stakes, holy water, and no reflections are done in an awesome way and really add to the movie. The Frog Brothers standing in as the Van Helsing characters was an awesome choice because they kind of know what they are doing but they get caught by surprise at almost every turn. The main thing about the movie is that it is fun, it never takes itself too seriously and plays up the inherent humor of the situations the characters are put in. This is just a great movie.

The Lost Boys is as close to a perfect vampire movie that you will ever get. It combines horror and humor to create one of the best movies of the 80's and in my opinion the best vampire movie of all-time. If you haven't seen this movie yet you were either born after 1995 or have been living under a rock since the 1980's. This is a must see movie for everyone because there is something that everyone can enjoy in this movie. Stream it, buy it, or pirate it, just go and see this movie as soon as possible.
Posted by Unknown at 10:11 PM